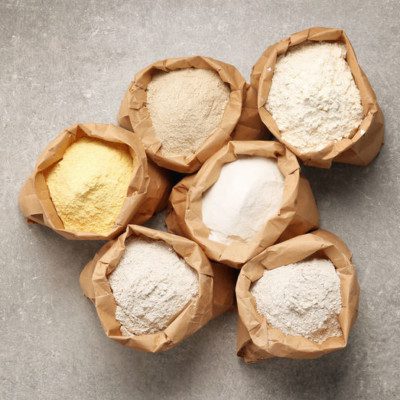 What are Grain-based Flours?

Grain-based flours are powders produced by reducing grains to small particle sizes. They are used primarily for making breads, cookies, cakes, pastries and other baked goods.

There is a wide variety of grain-based flours with wheat being the most-globally consumed. Corn is prevalent in the U.S., Latin America and some Asian countries while rye flour is a basic component of East and Central European baked goods.

Commonly used grain flours can be classified into gluten- and non-gluten containing types:

Producing flours from grains is an ancient practice which is believed to have originated around 6000 BC. Scenes of milling and baking can still be seen on the walls of Egyptian tombs dating back to 2600 BC.

Earlier flour grinding systems were cone mills which developed into stone mills. Roller mills were invented in 1865 in Hungary while the first steam mill was built in England in 1879. Jet milling is one of the newest technological advances for making superfine flours.1

Steps 3, 4 and 5 can be repeated several times to generate flour streams where each progressive stream contains less endosperm and more bran and germ impurities than the last. These streams are selectively combined and sifted to produce commercial grades of flour. The flour is then naturally aged or treated with bleaching and maturing agents. Production of whole wheat flours requires unique systems to prevent lipid deterioration due to rancidity.

Ancient grains such as spelt, Khorasan and emmer have vitreous and hard kernels with high ash content. They produce flours with low yield. Barley milling challenges are similar to those of ancient grains.

Millet and sorghum are decorticated prior to grinding. Roller milling produces whole wheat flour, semi-refined and a bran-rich fraction. Finely-ground particles are sifted after each pass. One major challenge with sorghum is the presence of starch granules in the mesocarp which makes the pericarp very friable.

Oat kernels have outer and inner hulls which should be removed prior to grinding and groat cutting and separation. The berries or groats are hulled, heat-treated to soften them and inactivate the lipases. Groats are scoured/polished with special brushes clean the groats. Pearling step for de-branning and pre-processing to improve flour yield and eliminating breakage and reducing microbial decontamination. The flour and bran system produces whole oat flour, or a combination of low bran oat flour and oat bran.

Rye is milled similar to wheat. A quick tempering step is needed to loosen the bran. For producing rye flour, finely corrugated break rolls are placed much closer than in wheat milling.

Performance of grain-based flours in bread formulations is summarized below: