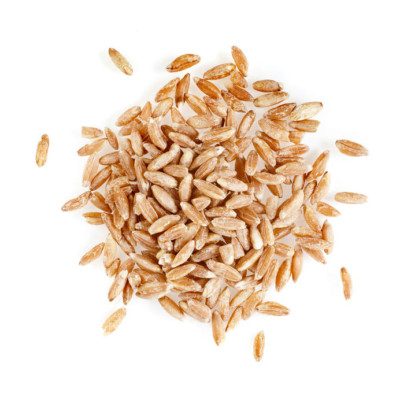 Emmer (Triticum dicoccon) is an ancient wheat  and an ancestor of modern durum.1 Similar to einkorn (Triticum monococcum) and spelt (Triticum spelta), emmer is known as a ‘hulled’ grain because it retains its hull during harvest. Emmer is also a tetraploid species, containing 2n=28 chromosomes.

Emmer wheat is a potentially valuable genetic resource for providing economically important traits in wheat breeding programs such as resistance to biotic and abiotic stresses in modern wheats.2

Cultivation of emmer began in the Fertile Crescent in the Near East, mainly Egypt, Israel, Lebanon, Jordan and Turkey about 10,000 years ago during the Neolithic period. It then spread to other parts of the world, mainly Europe, North Africa and India where, along with barley, was the main source of nutrition.

The introduction of high yield wheats such as bread and durum wheats in the 1960’s reduced the cultivation of emmer wheat to only few thousand square meters in the following decade.3

Recent revival of the cultivation and consumption of emmer and other ancient grains due to increased consumer demand for natural and organic products. Currently, around 2500 ha of emmer crop are cultivated in Italy alone with a yield of 3.5 tonne/ha ). Other emmer wheat producing countries include Spain, Turkey, Morocco, East Europe and Switzerland.4

In the United States, landraces of emmer were introduced by East-European immigrants in the late 19th century. It’s currently grown in the Northern plains.

Functional performance of wheat flours is essentially a reflection of the quantity and quality of their protein components.

As for the storage proteins gliadin and glutenins, their concentrations in emmer wheat are 37% (range from 33-39%) and 29% (range from 27-33%) of total protein, respectively.5

Despite the adequacy in gluten proteins content in emmer wheat, their quality is considered poor as judged by their low gluten index value and Zeleny tests.5,6

The composition of emmer is distinguished from other wheat varieties by its high content of resistant starch (RS), carotenoids and other antioxidant components. A unique aspect is its high lysine content (3.1 %) and which may reach 3.65% in the Rudico cultivar.5,8

Below is a summary of typical nutrient composition of emmer compared to durum, hard- and soft-common wheats.

Earliest anecdotal mention of using emmer in bread was in Sumeria (S. Mespotania) where the grains were hand-crushed, mixed with water, spread over a heated stone and covered with hot ash.

With the recent consumers’ interest in organic and high fiber grains, emmer has been reintroduced into diet via soups (whole or broken grains)9, soft porridge (grain blended with water or milk), hard porridge (cracked grain boiled in water and butter), home-made pasta,10  bread (Switzerland) or pane di farro (Italy) and a high-end replacement for rice pilaf.

Despite its mild flavor compared to rye or other grains, baked products and pasta made exclusively with emmer have dense and heavy textures.11 Blends of emmer and bread wheat may be the best way to reinvigorate its consumption.