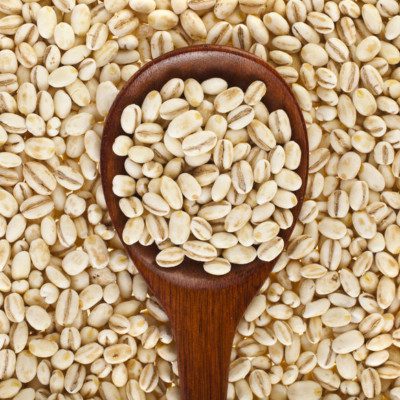 Barley (Hordeum vulgare) is a flavorful and chewy grain that can be added to breads and other baked goods. It may be hulled or pearled, which can change a product’s final flavor and nutritional profile.1

Barley is a non-GMO crop typically available for culinary use in two forms:

As one of the oldest cultivated grains known, there is a rich history surrounding barley. It was used in religious ceremonies, depicted on currency, and was reputed to form the basis of English measurements. It remains the world’s fourth most important cereal crop after wheat, rice, and corn.2

Barley is enjoying a renaissance in the craft and commercial baking sectors since it is considered an ancient grain and ongoing research attests to its health benefits. It is used in both flour and grain forms as well as in bran, whole or crushed grains, and flake forms.

Although it does contain gluten, breads made with it tend to be dense with a nominal rise. These flours are typically used with wheat flours. Some have suggested it is an ideal ingredient for bakers who appreciate a challenge.

When eaten as a whole grain, barley has several general nutritional benefits. Whole grains are typically high in fiber, iron, and B vitamins. It contains twice the protein and roughly half the calories of oats. The health benefits are commonly associated with the soluble beta-glucan ﬁber found in the grain.

The amount of each nutrient required daily varies by individual, based on factors such as age and gender.4

In studies, barley consumption was found to significantly reduce “bad cholesterol,” which is why several public health authorities, including Health Canada and the United States Food and Drug Administration, have approved health claims that barley lowers LDL cholesterol.5

For baking, barley is most commonly an ingredient in breads. Several technical and sensory evaluations of flour from different varieties and different combinations of flour admixtures have been conducted worldwide. One examined acceptance of barley in breads and found those with a sourdough admixture scored higher for total taste than those without. The beta-glucan content was notable for only its contribution to the breadcrumb color.6, 7, 8

In barley-growing nations, significant work to increase its consumption has been ongoing. This includes milling research in the European Union designed to help preserve the beta-glucan fiber when processed. Beta-glucan-enriched bread products were also tested. Researchers expect health claims to matter to consumers; however, manufacturers need to carefully design and market their products.6

The National Barley Foods Council petitioned the United States Food and Drug Administration in 2004 to recognize the ingredient and products made with it for its dietary fiber content for nutrition labeling and marketing claims. The final rule includes dry milled barley products as an eligible source of beta-glucan soluble fiber for health claims.9 Since 2005, the U.S. FDA has allowed barley foods to claim that they reduce the risk of coronary heart disease.2