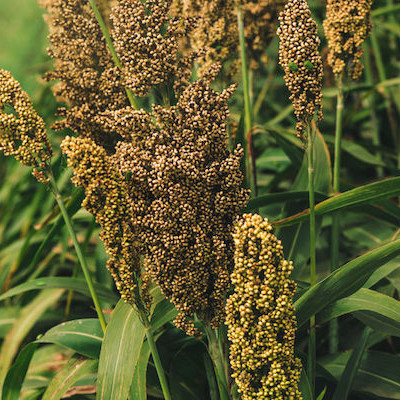 Different varieties of sorghum range in color from white and pale yellow to deep red, purple and brown. Sorghum is used as a feed  for cattle and poultry, as well as human consumption. It is often the only source of energy and protein in some parts of Africa and India.

The lack of gluten makes it a valuable grain for formulating bakery and other food products for people with celiac disease. The USDA categorizes its grains into four classifications based on structural characteristics:2

Sorghum is believed to have originated in Central Africa between 4500 and 1000 BC.  From there it spread into other parts of Africa, mainly Sudan, Egypt and Nigeria and Asia (India). Today, it is grown throughout the world, with the majority (∼55%) produced in Asia and Africa, followed by the United States which produces 30% of the global supply. The remainder is grown in the dry regions of Central and South America, mainly Colombia and Venezuela.3

Sorghum grain is an important food in arid parts of the world due to the crop’s drought tolerance.3

Due to the lack of gluten, it has poor rheological properties and inadequate  bread-making qualities. Sorghum-based doughs behave more like batters than doughs. To compensate for these drawbacks, composites of sorghum and other flours have been used in bread formulations.

A study on cookies and cakes by Oyidi  used a combination of sorghum flour and starch to produce an acceptable cake.3 However, cookies produced with 100% sorghum flour were tough and gritty.3

Breads made with sorghum composite flours were found by trained panelists to display hay-like aroma with slight sourness and astringency. Textural differences were also noted between sorghum and rye-based breads.4

Sorghum grains are rich in carbohydrates, especially those with slow digestibility.5 They contain moderate levels of protein with low levels of lysine but are gluten free. Similar to other cereals, it is a good source of B-vitamins. The grain also contains beneficial phytochemicals such as flavonoids which were reported to help retard tumor development.6

Sorghum’s slow starch digestibility is a result of its restricted endosperm accessibility as well as the presence of tannins. This quality has been found to be effective in reducing insulin (~55%) and glucose (35%) responses in healthy individuals who consumed muffins containing its flour.8

Under FDA labeling guidelines, Sorghum is classified as a whole grain.9