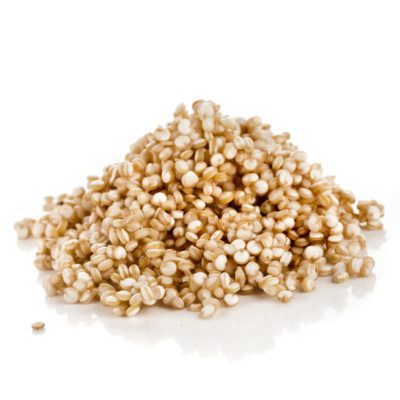 What is Quinoa Flour?

Quinoa is a tiny pseudocereal grown in the Andes. The seeds can be used either raw or roasted and the flour is typically blended with other flours in a variety of breads, pastries, desserts, and other baked goods.

The seed is gluten-free and is considered a healthy food of the future. The United Nations listed quinoa as an Andean “superfood” and as a good alternative crop for food security and for helping in the fight against hunger.1

An ancient grain, quinoa was first cultivated in the Andes about 7000 years ago and has been a staple diet since the pre-Columbian era. During the Spanish conquest, quinoa was neglected because it was considered an ‘Indian Food.’

The last half of the 20th century saw a revival of quinoa cultivation. Today, its cultivation spreads the Andes region to Canada and the Northwest United States. Between September 2017 and 2018, roughly 255 commercial products, including baked goods, using quinoa as an ingredient were introduced to consumers.

Because the seed is so small, milling can be challenging. Typically, saponins—bitter compounds found in the seed coat—are removed by washing. Abrasion milling is often used to dehull the seed to produce a wholemeal flour.

Usage of quinoa flour is increasing based on demand for gluten-free products. It is effectively used in non-gluten as well as healthy diets.

The flour can be either uncooked or roasted. It is commonly used in a 15 to 20 percent blend with wheat flour in desserts, breads, biscuits, and pancakes.

Several studies examined quinoa-wheat flour blends in breads, cakes and cookies. It was concluded that breads made with 5 and 10 percent quinoa flour to be of good quality while baked goods in which greater amounts of quinoa flour were used resulted in breads with a decreased loaf volume, more open crumb grain, and a slightly harsher texture. At 30 percent, there was a bitter aftertaste.2

Cake tests found the quality “acceptable” when quinoa flour was used up to 10 percent in the flour. In cookies, the flavor improved when blends of up to 20 percent were added. The spread and appearance improved with the addition of 2 percent lecithin.3

The United States Food and Drug Administration considers quinoa a food, which exempts it and the flour made from it from regulation.