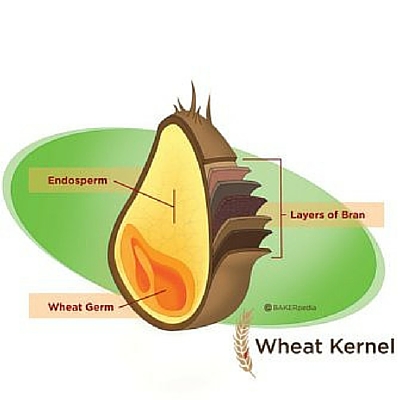 A cross-section diagram of the wheat kernel depicts its three components.

What is the wheat kernel?

The wheat kernel, or wheat berry, is the grain portion of the wheat plant and the source of flour. It consists of three main parts – the endosperm, bran and germ – which are usually separated for different flours and uses.

There are over 30,000 wheat varieties, the most common being hard and soft red wheat. White wheat is also popular, while rare varieties include purple, black, brown, or green and gray wheat. The kernel’s size generally ranges from 5 to 9 mm long and weighs between 35 to 50 mg.1  Wheat kernels are sold raw, dry, pre-cooked, frozen, or most commonly as flour.

Wheat began as a wild grass, although its exact geographical origin is unknown. Some theories point to ancient Mesopotamia or along the Euphrates and Tigris river in Egypt as its birthplace. However, most ancient languages include a mention of wheat.The earliest known records of wheat cultivation are by Swiss lake dwellings in 6700 B.C. China began cultivation around 3000 B.C. Early milling practices involved grinding the entire wheat kernel between two large stones.

Wheat has been in the U.S. since colonial times. However, it was during the late 1800s that its cultivation and production took off. Red Wheat varieties were introduced in Kansas by Russian immigrants, and it soon became the staple crop of the American farm land.

The three parts that make up a wheat kernel each have different qualities and nutrients:

Whole grain flour is made by grinding all three parts the wheat kernel together. Whole wheat flour grinds the bran, germ and endosperm separately, and then mixes them altogether in the end. These two flours naturally include the complete nutritional benefits of the kernel, such as fiber, protein, minerals, and antioxidants. However, whole grain flours characteristically have low water-retention when used in products.

White flour is made from only the endosperm. Enriched wheat flour adds back some of the nutrients lost from the bran and germ, and then some, during an enriching stage. These flours are a good source of iron, B vitamins, and complex carbohydrates, with some having twice the folic acid of whole wheat products.

Sprouted flour or mashes stimulate the germ portion of the kernel to sprout before it is milled into flour. This process increases the kernel’s bioavailability and cracks the outer husk of the bran layer. Sprouted products have some increased digestibility and nutritional value compared to whole grain or enriched grain products.

Modern commercial production of flour replaces stone mills with high-speed steel rollers. Wheat kernels are first cleaned, tempered and then cracked by rollers. Depending on the type of flour, the kernels are then either separated by screens or left together. Next, the pieces are ground with the rollers and sifted through fine screens multiple times until they are fine enough for flour.5

There are six main classes of wheat varieties used for baking. Red and white varieties are the most common, and each  is best for specific products. Hard red winter and spring flours are generally used for yeast breads and hard rolls. Soft red winter and soft white flours tend to work better for lighter products such as cakes, pastries, or crackers. Hard white, a relatively newly developed variety, is for yeast breads and noodles. The Durum variety is used for pastas.6