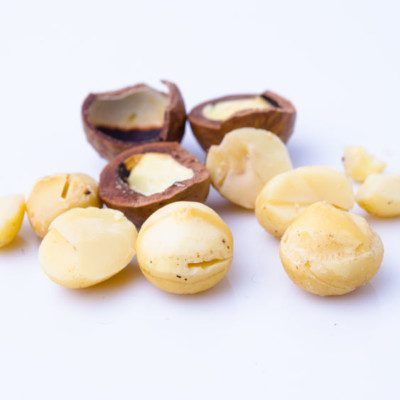 Macadamias are delicate nuts that are tasty on their own or as a premium ingredient in food products. In baked goods, the macadamia’s unique buttery texture; rich, sweet flavor and creamy color enhance products’ sensory appeal.

Macadamias have a tender, soft crunch and a rich, sweet flavor that blends very well with the delicate, nuanced flavors of white chocolate or tropical fruits. They are an expensive ingredient and can add to the consumer’s perception that a prepared food product is premium, high quality or gourmet.

Macadamia trees originated in the aboriginal area of Eastern Australia. In the later part of the 19th century, the trees were introduced to Hawaii.1 Currently,  Hawaii is the largest producer of macadamia nuts. Other producing countries include Brazil, Indonesia and South Africa as well as California and Florida which produce minor quantities.

Macadamia nuts are named after the Australian chemist John Macadam (1827-1865) who was a professor as well as a public health analyst.2

Nuts can generally influence a person’s choice of a baked good. They add crunch, flavor and a visual dimension. Macadamia’s rich and delicate sweet flavor allow its use in sweet foods such as cookies, cakes, pies, ice cream and confections.

Typically, nuts are energy dense, high in unsaturated fats and may help weight management and support cardiovascular health. Compared to other tree nuts, macadamias provide the most fat, about 70%, with monounsaturated fatty acids constituting the largest portion (~80%).3  They also contains the highest concentration of palmitoleic acid found in any food (22%).

An important aspect of macademia’s lipid profile is its low omega 6: omega 3 ratio, a critical factor in reducing the incidence of inflammation. They are also rich in calcium, iron, phosphorus, magnesium and potassium as well as vitamins (thiamine, riboflavin, niacin, retinol), flavonoids and antioxidants (tocopherols, tocotrienols and squalene).

Various nutrition studies have shown that consumption of macadamia nuts can help in reducing bad (LDL) cholesterol and triglycerides,3 as well as improving insulin sensitivity.4

Large scale commercialization of macadamias began in Hawaii in the later part of the 19th century. The macadamia tree produces a spherical kernel with two joined halves. The kernel is encased in a shell and outer husk. When ripe, the enclosed nut falls to the ground and is manually picked up off the ground. Once harvested, the husk should be removed within 24 hours. The shelled nut is dried to approximately 10% moisture, sorted and sent for further processing.5

Macadamia nuts find use in sweet baked goods and adds a premium quality to a food product.

Nuts can be packaged and stored for short periods at ambient temperatures. Cold or frozen conditions are recommended for longer periods. Water condensation should be avoided after defrosting to avoid discoloration and rancidity.

Food safety concerns with macadamia include salmonella contamination and mycotoxin development. Monitoring for moisture6 and pest control can reduce these hazards.

Macadamias are one of the “Big 8” allergens identified by the FDA in the Food Allergen Labeling and Consumer Protection Act. The FDA guidance on proper labeling of macadamias can be found here.

In 2017, the United States Food and Drug Administration replied to a petition for allowing a qualified health claim for the relationship between macadamia nuts consumption and reduced risk of coronary heart disease. Currently, food manufacturers can use the following claim:6

“Supportive but not conclusive research shows that eating 1.5 ounces per day of macadamia nuts, as part of a diet low in saturated fat and cholesterol and not resulting in increased intake of saturated fat or calories may reduce the risk of coronary heart disease. See nutrition information for fat [and calorie] content.”

5 Tips to Ensure Food Health and Safety in Busy Bakeries

Should We be Concerned About Enzymes?

Have you signed up for our free membership program yet?