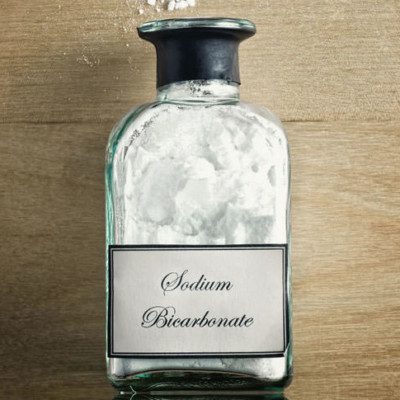 Bases, like sodium bicarbonate, are chemical substances which react with acids to neutralize them.

Bases are chemical substances which react with acids to neutralize them. The terms ‘base’ and ‘alkali’ are often used interchangeably, although not accurately. While both substances can neutralize acids, alkalis are a special subset of bases which dissolve in water. Metal oxides such as copper oxide (CuO) is a base because it neutralizes acids while sodium hydroxide (NaOH) is both a base and an alkali because it neutralizes acids and is soluble in water.

The strength of bases in aqueous systems such as cake batters can be determined using routine techniques such as pH meters.

Bases are abundant in nature. They can also be produced by chemical synthesis.  Sodium bicarbonate (baking soda, NaHCO3) deposits occur naturally in Searles Lake, California and Colorado’s Green River basins, as well as in Turkey, Mexico and Africa, where they are mined using coal mining techniques. Synthetically, sodium bicarbonate can be produced by various methods. The most prominent one involves a two-step reaction of sodium hydroxide with carbon dioxide:

Sodium hydroxide (lye, NaOH) can be  produced mainly from the dissolution of  sodium oxide (Na2O) in water.

Another method for NaOH preparation is via  electrolysis of sodium chloride.

A weak base such as sodium bicarbonate dissociates in water to release a few hydroxyl ions (-OH) while a strong base and alkali such as NaOH releases almost all its -OH ions. This is reflected in a pH of 9.5 for the sodium bicarbonate compared to 14.0 for sodium hydroxide.

Bases are vital components of chemical leavening systems in  baking applications. Their neutralizing value, NV, indicates the amount (g) of the base needed to neutralize 100 g of leavening acids such as MCP, SAPP, SALP, etc to produce sufficient amounts of carbon dioxide for proper leavening.1

Similarly, sodium bicarbonate reacts with buttermilk, sour cream, tartaric and other acids to generate carbon dioxide. The role of bases (specifically alkalis) in the Maillard reaction has also been demonstrated in the generation of non-enzymatic browning products  which impart unique crust color and flavor in breads and other thermally-treated foods.2,3

Bases are widely used in the food and baking industry (bread, cakes, quick breads, muffins, pastries, cookies, and other chemically-leavened baked goods). Other uses include corn nixtamalization, neutralization of cocoa powder to improve its color and flavor (Dutch process), curing of olives and Nordic lutefisk,  and in Chinese “century eggs,” among other applications.

The following table shows a list of bases used in food applications showing their pH and function:

In accordance with 21 CFR 184 “Direct Food Substances Affirmed As Generally Recognized As Safe – GRAS,” bases in their usual crystal or powder form such as ammonium bicarbonate, sodium and potassium bicarbonate, can be used as a direct human food ingredient as leavening and pH control agents, with no limitation other than current good manufacturing practices (GMPs).4