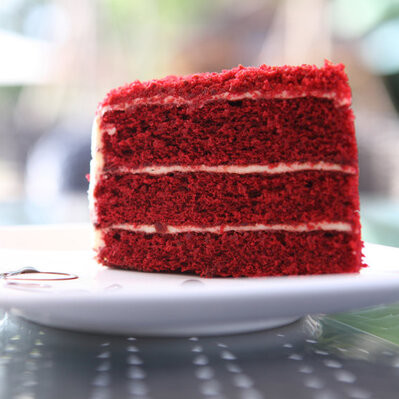 What is Red Velvet Cake?

Red velvet cake is a delicious cake often covered with sweet cream cheese frosting. The name “Red Velvet” is a reflection of its characteristic deep red or burgundy color and its smooth texture.1

The recipe for red velvet cakes has won the hearts of dessert lovers, and today we find it in various formats such as:

There are several theories and urban legends on how the red velvet cake was created. One of the theories suggests that its origin dates back to the 19th century, where cocoa was used to soften the texture of cakes and for this reason they were called “velvets”.

Another story claims that cake came about during World War II as food was highly rationed and bakers used beet juice to improve the color of their cakes and improve their yield since it kept the cakes moist.

How red velvet cake is made

Traditional red velvet cakes are usually made using kitchen ingredients that are familiar to the consumer. The creaming method is in most cases the preferred mixing method to create highly aerated products.