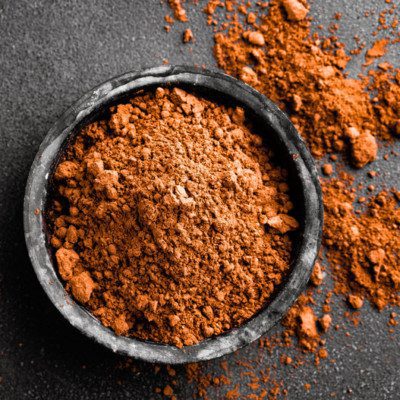 What is Cocoa Powder?

Based on cocoa butter content, cocoa powder can also be classified into: 2

Cocoa (Theobroma cacao ) is an ancient crop from the Amazon basin. In the 16th century, Cortes, a Spanish conquistador, found that Mexican indigenous peoples use cocoa beans for the preparation of drink by the name of xocolatl. 1

The earliest development of cocoa powder was in 1828 when Van Houten a dutch chemist, pressed cocoa liquor through a press and partially removed cocoa butter from the liquor producing a powder. 1 Today, cocoa is consumed worldwide as a drink or as a staple ingredient for several baked goods.

Cocoa powder is commercially produced through the following process:1

Cocoa powder is used in a variety of baked goods such as cakes, cookies, croissants, bread and brownies.

Some considerations when using cocoa in baked goods:2

When substituting unsweetened chocolate for cocoa, consider the following: 2

Cocoa powder is considered to be safe by the FDA, and its product identity is defined in the CFR Title 21 Part 163.3

In the EU, cocoa powder is considered to be safe and its product identity is defined by the EU Commission Regulation 2000/36/EC.4