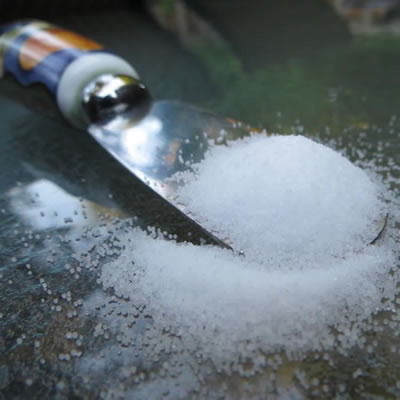 Salt is used in baking to add flavor, to strengthen dough and to slow fermentation.

Salt is a crystalline compound consisting of sodium and chloride ions. Salt mainly functions as a flavoring in baked goods. However, its effect on dough rheology is profound.

Reports from 1654 indicated the Onondaga Indians made salt by boiling brine from salt springs. Colonial Americans were making salt by boiling brine in iron kettles during the time the U.S. Constitution was drafted. By the time of the Civil War, 3,000 workers produced over 225,000 short tons of salt by boiling. Today, salt is obtained using solar evaporation where climate permits, or through rock mining underground.

1. Flavor: Bread without salt will be flat and bland. Salt also acts as a taste enhancer in cookies and cakes.

2. Strengthener in dough: Salt tightens the gluten structure which is crucial for yeasted dough products.1 The higher the level of salt, the harder the dough becomes.2 This strengthening allows the dough to hold the carbon dioxide produced during fermentation. Without salt, or the appropriate amount, the dough will be slack and result in poor loaf volume.

3. Slows fermentation: It creates a retarding effect on the yeast. Water is transferred from yeast to salt through osmosis which slows the reproductive activities of the yeast, in turn slowing fermentation in certain cases.

In large batches, add salt in approximately 3-5 mins before the end of dough mixing. Although many commercial bakers practice this through automated salt dispensing, many other bakers have done away with this practice. This is in part due to the mixer operator’s error in forgetting to add the salt.

There is no harm in adding the salt together with all the other ingredients before mixing, in a smaller vertical type mixer. However, in larger industrial mixers, this would increase the energy load, due to the dough strengthening power of the salt, and may wear out the mixer faster than desired.

Kosher salt dissolves quickly and flavor is dispersed rapidly (preferred for cooking); Sea salt: adds extra flavor to cooked dishes, produced from evaporated sea water. Sea salt does not require extra processing as it comes from sea water so it is more natural; however, it also does not contain iodine, an essential nutrient, that is commonly added to traditional table salt.