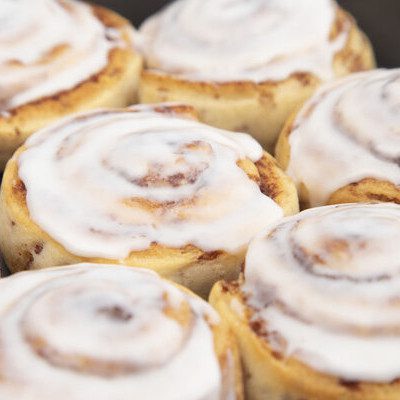 What is a Cinnamon Roll?

A cinnamon roll is a sweet baked dough filled with a cinnamon-sugar filling. Made with a rich dough leavened with yeast, their characteristic form is due to rolling a dough sheet containing sweetened cinnamon filling.1

Sweet rolls have been produced since ancient times. However, the arrival of cinnamon spice to Europe resulted in the creation of this unique sweet treat. The cinnamon rolls we know today are thought to have originated in Sweden. There, they are called kanelbulle and are celebrated on October 4th as a national holiday.2

In the US, cinnamon rolls’ popularity began in the southern states and later expanded through the whole nation.2

Commonly used ingredients in the production of cinnamon rolls include:1

Cinnamon rolls are highly caloric bakery products due to the high levels of sugar and saturated fats. A commercial cinnamon roll provides 250 – 350 kcal per 100 g serving.3

Cinnamon rolls are commercially produced through the following process:1,

Cinnamon rolls should be produced considering the following factors:1

Cinnamon rolls are included within the FDA definition of buns and rolls. Ingredients required for cinnamon rolls production are considered GRAS by the FDA.4

In the EU, coumarin a substance found in cinnamon has a maximum level of addition in baked goods of 50 mg/kg due to its potential health effects on the liver.5