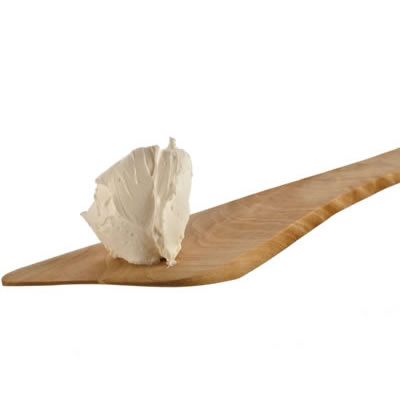 Cream cheese is a soft and spreadable fresh cheese with a slightly tangy, but mild, flavor.

What is Cream Cheese?

Cream cheese is an internationally popular soft and spreadable fresh cheese. This cheese is not matured naturally, unlike most cheeses, and is intended to be eaten fresh. It is often compared to mascarpone and Neuchâtel in flavor and texture, but the process of making cream cheese differs from almost all other cheese.

Making cream cheese on an industrial scale is a highly refined and scientific practice. Manufacturers add lactic acid to pasteurized whole milk and allow the mixture to coagulate. This is done at room temperature, or 20℃ (70 ℉). This changes the structure of the amino acids, and brings the mixture together. Also, this process lowers the pH, making it more acidic. The mixture is then heated to 52-63 ℃(125-145 ℉), in order to stop the changes occurring to the amino acids. Without this step, the cheese would become liquid again. Guar gum or other stabilizers are also often added in order to prevent the water and fat from separating in the cream cheese, improve texture, and increase shelf life.

Cream cheese has a short history in comparison to other cheeses. The first mentions of soft cheeses similar to cream cheese are in England in 1583, but the first written recipes are not until 1754. Modern cream cheese was not invented and named until 1873 when William A Lawrence added extra cream to Neuchâtel l, making what he called cream cheese. He partnered in 1879 with Samuel S Durland, and by 1880, they were producing Philadelphia cream cheese, which is now the most popular brand in the United States. In 1928, the Philadelphia brand was sold to Kraft, and it is still produced by Kraft today.

When made correctly, cream cheese has a smooth and creamy texture, with a slightly tangy, but mild, flavor. It is regulated by the USDA as having at least 33% milk fat, no more than 55% moisture, and a pH between 4.4 and 4.9. In other countries the fat content is often required to be higher. The high fat content makes it relatively unhealthy. Around 40% of this fat is saturated fat, but none of it is trans fat. Additionally, cream cheese typically only has one gram of protein per ounce. However, it is healthier than butter, and often used in place of butter on toast or bagels.

Cream cheese is now used in a variety of applications throughout America. It is commonly spread on bagels in the morning, mixed into dips, eaten with crackers, and used as a spread. Cream cheese is also used in frosting, as a substitute for butter in cakes, mixed into mashed potatoes, and much more. Recipes for nearly every type of food feature a variation that involves cream cheese.

BAKED in Science S2E32: What’s the Most Important Aspect of Flour?

How to Bake Delicious Cake Without Eggs

The Strength in the Dough: Gluten