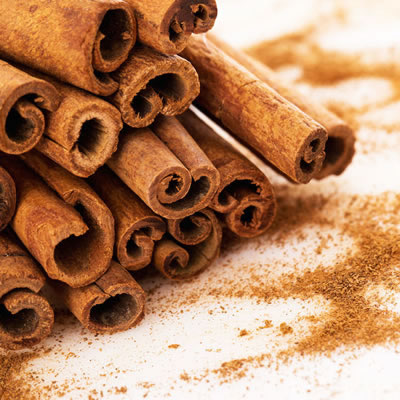 Cinnamon is a spice or flavoring derived from the inner bark of several different trees within the genus Cinnamomum. Commercial food manufacturers use it in powder, stick, and oil forms in sweet and savory foods.

Kinds used in baking include:

Cinnamon’s use can be traced to 2800 B.C. in what is now known as Sri Lanka. European desire for it and other spices propelled exploration worldwide. The Portuguese discovered Sri Lanka and the spice in the 16th Century and started its importation to the continent, which continued into the 17th Century. It was during Dutch occupation of what was then known as Java during the 17th Century that the practice of its cultivation began. The East India Company became the primary exporter of the spice.1

Today, it is still grown in Sri Lanka and South India. Cassia is the most common cinnamon sold in North America. It is typically sweeter and more aromatic than “true cinnamon,” but it can be astringent. It is harvested from the inside bark of both young shoots and mature trees and then processed and frequently ground into a powder. Bark from trees growing at higher altitudes is considered better, with a greater oil content than those growing at lower elevations.

Since first described scientifically, the names for these trees has changed repeatedly since 1825 as different botanists applied different names to plants within this genus. This still fuels the confusion surrounding cinnamon and cassia.2, 3

Cinnamon gets its flavor and aroma from an essential oil that makes up about 0.5% to 1.0% of its composition. “In cinnamon, the leaf and bark oils have entirely different flavour profiles and qualities, and one cannot be substituted for the other,” write B. Krishnamoorthy and J. Rema in Cinnamon and Cassia: The Genus Cinnamomum.2 “There are many blends available which are imitation flavourings and could be distinguished through sensory and instrumental analysis.”

Worldwide, it is used mostly as a culinary ingredient. The bark oil is used in commercial manufacturing of baked goods and confectionery, while cinnamon-based oleoresin is used to create cake mixes and convenience foods. Cassia oil may be used, but less frequently, in bakery and confectionery. Cassia buds, similar in appearance to tiny cloves, are used in confectionery and purported to taste as good as the bark.4

Apart from flavor, cinnamon is also used in commercial baking to impart a specific color to a product. “For certain purposes, it may be desirable to give a baked product high cinnamon colouring and yet only relatively mild cinnamon flavouring,” write J. Thomas and P. P. Duethi in Handbook of Herbs and Spices. “In this case, the buyer would look for a red-coloured cinnamon (cassia) with a moderate oil content, or perhaps a cinnamon blend (in which two or more grades are mixed to give a desired performance). The blending of different cinnamon varieties or grades to create tailor-made cinnamon for various types of baked goods has become a standard practice. …[P]rovided the blends are formulated properly, they have many advantages.”4

Finely ground cinnamon is ideal for use in flavoring baked goods, although the bark oil may be used for commercial applications because it can be measured more accurately.2  In the United States especially, cinnamon mixed with sugar is commonly used to flavor apples (apple pie), cereals, and baked goods such as doughnuts, pastries, and sweet breads.

The main flavor of the bark is cinnamon oil, which contains mainly cinnamaldehyde, cinnamic acid, and cinnamic alcohol.

Additives to cinnamon can be common. Freshly-ground cinnamon should contain from 0.9 to 2.3 percent essential oil. The physical and chemical quality standards for both whole and ground cinnamon are provided in ISO 6539-1983.4

A great deal of confusion exists between the different types as well as between cinnamon and cassia. When looking at two different quills or sticks, the color and density is key, say experts. Ceylon cinnamon has a softer, lighter color and is rolled in layers. Other varieties are darker and harder; these will be rolled in only one layer.6

It’s primary culinary use is as a flavoring. The flavoring component exists in cinnamaldehyde, which is responsible for cinnamon’s distinctive scent and taste. It is also volatile at high temperatures. The flavor can both degrade and evaporate at high heat. This can alter the taste of the baked good.

Using excessive amounts will delay fermentation and the proofing of dough due to the spice’s antifungal properties. It can also cause the dough not to rise at all. Most of the time, yeast levels have to increase, for example in cinnamon rolls, to compensate.5

However, cinnamon’s anti-microbial properties are said to be responsible for limiting the growth of Listeria and E. coli in foods, which can extend a product’s shelf life.6

After purchasing cinnamon, it is key to store it in a cool, dry place to prevent the volatile oils from dissipating. Humidity can cause powdered cinnamon to cake. Good storage helps preserve flavor.  Whole cinnamon does not lose its oil content as rapidly as ground cinnamon. Cinnamon in oleoresin form is stable at high temperatures, but the substance will oxidize and change color when stored improperly.4

Culinary cinnamon is considered generally recognized as safe by the United States Food and Drug Administration. This also includes essential oils and oleoresins derived from cinnamon.9 However, some individuals may develop allergic reactions from eating cinnamon. There have been some dermatitis cases reported by commercial bakers from repeated handling of cinnamon-infused doughs.4

The precise details regarding product labeling for foods sold in the United States containing spices, including cinnamon, are outlined in Title 21, Volume 2 of the Code of Federal Regulations, Part 101.10, 11