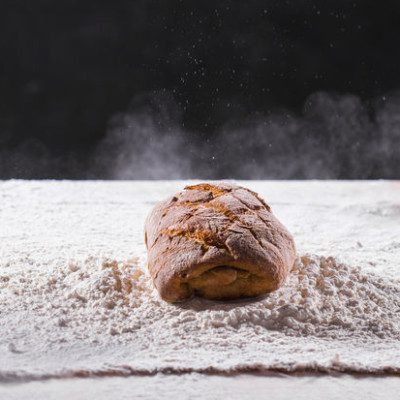 What is High Gluten Wheat Flour?

High gluten wheat flour is made from grinding U.S. hard red winter (HRW) and hard red spring (HRS) wheats to produce a finished product with 13.0–15.0% protein. This flour may also be produced from Canadian wheat, such as Canadian Western Red Spring (CWRS). It is made up of almost pure endosperm and is best suited for the production of baked goods which require high strength and structure.

Due to its high protein content, high gluten flour is characterized by:

High gluten flour is usually a short patent flour from hard wheat that has been selectively milled. Its  production follows the same principles of standard wheat milling operations. The main difference here is that the blending of milled wheat fractions and streams is more selective to ensure that lower levels of shorts and bran end up in the finished product.1

High gluten flours are often treated with potassium bromate and bleached with benzoyl peroxide. The FDA requires that all flours be enriched with thiamin, riboflavin, niacin, folic acid and iron. High gluten wheat flour may not undergo post-milling treatment in order to comply with today’s clean label markets.

High gluten wheat flour is almost exclusively marketed at retail level and used by premium or artisan bakeshops. Adoption of high gluten flour at wholesale level has been limited due to its high price compared to higher extraction flours. It is best suited for bagels, pizza and hard rolls.

High gluten wheat flour can be used in combination with other bread flours in the production of multigrain and rye bread to reduce the “denseness” of the finished products.

San Francisco sourdough starters are generally prepared with high gluten flour to compensate for the highly acidic environment developed in the dough that negatively degrades the gluten structure after typical fermentation times.