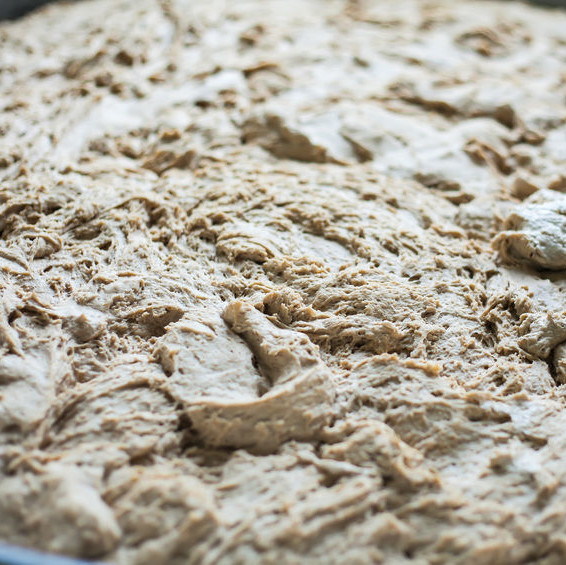 What is dough mixing?

Dough mixing is a process in which flour and water are mixed until gluten is developed, a result of the enhanced interaction between dispersed and hydrated gluten-forming proteins. It’s quite different from batter mixing due to differences in their respective formulations—specifically, the proportion between dry and liquid ingredients.

The goal is to:

Dough mixing can be viewed as a simple reaction in which the reactants transform into a homogeneous and aerated dough:1

Dough formulation that fall into the “dough mixing” concept should meet the following conditions:

Mixing is a crucial step in all dough systems used for the manufacture of yeast-leavened baked goods. It is critical to obtain the right rheological properties and consistency of the dough for the production process to run smoothly, as well as achieve the desired finished product quality.

In this stage the dough becomes a fluid and viscous mass (with minimum or no elasticity) that has lost most of its water holding capacity. As a consequence, most of the retained water is released and dough becomes excessively sticky.

Effects of Undermixing (dough too cold):

Effects of Overmixing (dough too warm):

The addition of salt, sugar and fat should be delayed to reduce dough mixing time. This helps gluten proteins hydrate and develop quickly (clean-up stage takes much less time), and provides maximum friction against mixer bowl.

Mixing is an intensive mechanical operation that produces heat from friction. This is evidenced by the temperature increase in the mass being transformed into dough. For proper machining during makeup, a final dough temperature should be close to 76–82°F (25–28°C).

To assess if the dough is properly developed, perform the gluten film test. A small portion of dough is stretched between the hands into a thin, smooth, translucent film to test its extensibility and elasticity. This test can be performed for both small and large-scale doughs.