The farinograph is a tool to assess baking qualities and performance of wheat flour doughs. It records the resistance to deformation, or the consistency of dough mixed from flour and water.

To millers and bakers, farinographs are essential for:

The invention of the farinograph dates back to 1928 when Carl Brabender of Germany established a method for measuring the baking qualities of bread flour.

Farinographs measure and record the resistance to deformation of a flour/water dough against the mixing action of blades over time and at a specific speed (rpm) and temperature. Dough resistance is expressed as motor torque, in dimensionless units known as Farinograph or Brabender Units (FU or BU). During the test, the dough is developed and further broken down.1,2

Resistance has traditionally been known as “consistency.” The maximum consistency of the dough is adjusted to a fixed value (500 FU) by altering the quantity of water added (i.e. % absorption).

The amount of water added to balance the farinograph curve on the 500-FU line, expressed as a percentage of the flour (14% mb). This parameter is useful in adjusting the water relationships in commercial doughs when flour changes.

Provides the time (in minutes) between the origin (time zero) of the curve and its maximum (peak). It is used to make adjustments during mixing in commercial processes when the flour mixing requirements change. Stronger flours with higher protein content have a longer development time than weaker flours with equivalent particle size distribution.

Measured as the difference in Brabender units between the top of the curve at the optimum and the point on the curve 5 min later. The MTI indicates how fast the gluten structure breaks down after reaching its full development. Lower MTI values correspond to stronger flours, typically used in the production of high specific volume bread. 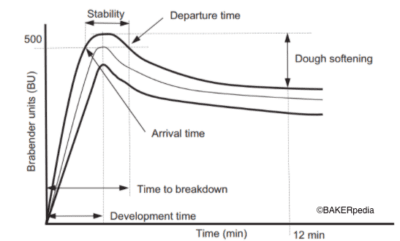