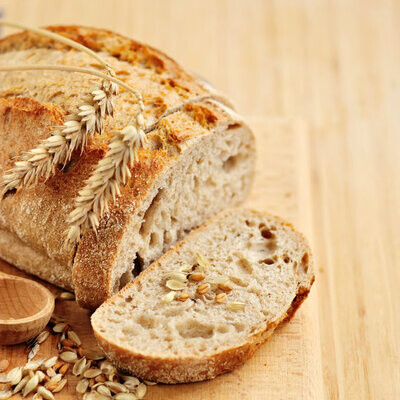 What is Hexose Oxidase?

Hexose oxidase, or simply HOX, is a unique bakery enzyme which can strengthen the gluten network in yeast-leavened doughs and enhance finished product volume. It can also contribute to a ‘clean label’ claim.

Hexose oxidase is an enzyme which, in the presence of oxygen, is capable of oxidizing mono- and di-saccharides, maltose and lactose to their corresponding lactones or aldonic acids. This process generates hydrogen peroxide (H2O2) which then oxidizes thiol groups on flour proteins, thus creating disulfide bonds in the gluten network that contribute to a better dough quality.2

Typical functions of HOX include the following:

Hexose oxidase is a derived product produced by specialized yeast strains of Hansenula polymorpha that has been genetically modified. In the commercial process, HOX is produced by controlled fermentation in closed fermentation tanks and further downstream processing.

Alternatives to traditional redox agents (e.g. ADA, bromates and calcium peroxide) include gluten strengthening enzymes. Such enzymes are glucose oxidase (GOX) and hexose oxidase (HOX). High-speed bakeries are paying a lot of attention to both GOX and HOX, mainly due to the need to offer clean label bread and buns that are free from ADA and other chemical additives.

As HOX requires both oxygen and glucose, its strengthening effect on the bulk rheology of the dough occurs mainly during mixing, where oxygen is not limiting. In later stages of the breadmaking process, such as proofing and baking, the reaction rate of oxidative enzymes is yet to be fully understood. In such advanced stages, it is reasonable to assume that most of the oxygen incorporated as air during mixing has been consumed by yeast for cell growth.

HOX in bread and bun formulations

Levels of HOX in bread and bun formulations depend on enzyme purity and dilution. Enzyme suppliers should be able to inform the bakery the dose in baker’s that best suits product and process application. As any other enzyme, HOX is almost always sold in powder form, going along with sodium chloride and wheat or potato starch as carriers or diluents.

On a 1 to 1 basis, HOX is much more expensive than glucose oxidase. This is due to its much broader substrate specificity.

Similar to other enzymes, HOX is GRAS (Generally Recognized as Safe) and considered a food processing aid in the US. The FDA regulates the origin (food-compatible), safety of related manufacturing processes and establishes limits to HOX use (if applicable) based on GMPs.