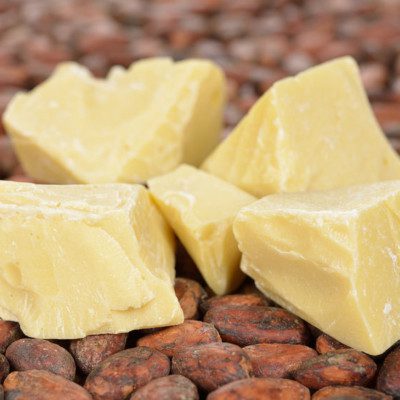 What is Cocoa Butter?

Cocoa butter, a saturated fat stable at room temperature, is obtained from cocoa tree beans. It is used in chocolate, candy, baking, cosmetics and pharmaceuticals. The butter has a light yellow color and may have a chocolate aroma in the natural form, unless it’s removed by deodorization.

Most commonly used in milk chocolate and white chocolate, cocoa butter is responsible for the following characteristics in chocolate:2

The Olmecs (1500-400 BC) are believed to be the first population to discover and use cocoa. Later the Mayans and Aztecs cultivated the tree in Southern Mexico. Following the fall of the Aztec civilization, cocoa was brought to Spain where the first chocolate factory was established in Barcelona. From there, the use of cocoa butter spread into England where chocolate was made available to the public by Fry and Sons Company in 1847.2  In the U.S., Milton Hershey began using itin producing chocolate after attending the World Fair in Chicago.

Cocoa butter’s predominant combination of triacylglycerols of palmitic, stearic and oleic acids allows it to be solid at room temperature and to melt in a narrow temperature range of 32°C to  35°C ( 89°F to 95°F).1

It serves the following functions and attributes of chocolate:

Cocoa butter is composed mainly of  saturated and mono-unsaturated triglycerides. It does not contain carbohydrates or proteins.

The following make up the present fats:2

After this, the beans are sent through a grinder that separates the hulls to produce nibs which are ground to produce cocoa mass (cocoa liquor). Cocoa liquor is pressed to extract the butter using hydraulic presses. Cocoa butter can also be separated using solvent extraction.2

Cocoa butter is used for thinning chocolate and making chocolate coatings. It is seldom used in baking applications because it hardens at room temperature, making it less than ideal for creaming methods unless combined with other liquid fats.

Cocoa butter has a shelf life of 2-5 years when stored in an airtight light-proof container.

The following guidelines provide the percentage of cocoa butter used by chocolate type, according to the EU Directive:1

The FDA also provides guidelines for substitution of cocoa butter under Code of Federal Regulations Title 21.

Sustainable Chocolate in the Baking Industry

Why You Should Use Cocoa Fiber in Baked Goods

BAKED In Science S2E19: Steamed Donuts and Other Innovations at IBA18