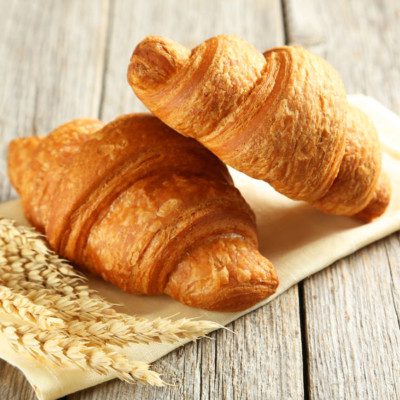 What is a Croissant?

A croissant is a laminated, yeast-leavened bakery product that contains dough/roll-in fat layers to create a flaky, crispy texture. Croissants belong to the Viennoiserie or pastry category of baked goods along with brioche, Danish and puff pastries. A croissant usually contains normal levels of salt, yeast and sugar.1

The texture and eating quality of croissants are created by lamination and expansion. The lamination process is the folding of dough to create alternating dough and fat layers while expansion is caused by the leavening action of yeast fermentation, and physical separation of the dough and fat layers during the oven spring stage of baking as the water trapped between them vaporizes to steam.1

As legend has it, the croissant was invented as a special roll in Vienna to celebrate the end of its invasion by Turkish troops from the Ottoman Empire in 1683. The enemy decided to attack at night to avoid being seen, but the Viennese bakers, who were working at the time, realized the city was under siege and alerted the authorities.

To immortalize this victory, a baker with the name of Peter Windletter was selected to create the Hörnchen (“small horn” in German), with the shape of a crescent to symbolize the Ottoman flag and emblem. By eating this roll the people in Vienna celebrated symbolically their victory over their feared enemy. Marie-Antoinette d’Autriche, originally from Vienna, officially introduced and promoted the popularity of the croissant in France, starting in the late 1700s.1,2

How are croissants made?

*The standard quantity of roll-in fat for croissant is 25% based on total dough weight.

In laminated products, quality of the baked goods product depends heavily on the ability of water vapor to force apart the dough layers during baking. This creates a flakier product with superior eating quality, vital for consumers’ acceptability and market success. The objective of lamination is the creation of a large number of separate dough layers. The more individual layers created, the flakier the finished product will be.4

It is important to maintain a relatively low temperature in the bakery (10–20°C or 50–68°F) in order to keep the roll-in fat plastic below its melting point so its pliable and not absorbed by the dough. Care should also be exercised to prevent the fat from becoming too firm at cold temperatures as this could cause handling issues. The temperature inside the plant can be controlled with a properly installed HVAC system.

The key quality parameters when purchasing laminating fats is their melting point and temperature range of plasticity, i.e., essential for better workability of the dough at room temperature.

Why Oven Heating Modes Matter in the Patisserie Market

What’s the Big Deal with the Kill Step Calculator?

BAKED in Science S2E2: The Future of Mixing