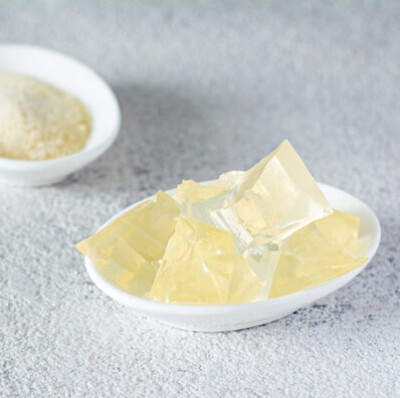 Gels are viscoelastic substances capable of modifying the texture and consistency of batters, doughs and coatings. When used in small concentrations, food gels are considered food additives.1

Bakery food gels have also found use as potential replacements for fats or gluten or other main ingredients in fat-free or gluten-free formulations, respectively.1 Food gels are commonly classified into 3 main categories according to their origin:1

The term gel was first used to describe a semi-solid substance discovered by the Scottish chemist Thomas Graham in 1899.2

Gels are produced when water or other molecules are entrapped in a matrix via tight bonding of large molecules such as proteins and polysaccharides; this forms a viscoelastic substance with unique physical and chemical properties.1

Due to the wide variety of gels present in baked goods a generalization of their nutritional properties is not feasible. However, for gels made from vegetable gums, their nutritional contribution is negligible due to their low concentration and indigestibility.

Due to the broad range of gels available in the baking industry, a wide variety of production processes can be used in their extraction.

Gels have a variety of applications in the baking industry. They can be used as texturizers in doughs and batters, or as topical coatings. Recently, gels have found a renewed interest in ‘free from’  food categories such as gluten-free or fat-free formulations.3

To obtain the desired results in gluten-free or fat-free bakery products a combination of two or more gels is commonly required such as: xanthan gum, locust bean gum, CMC, HPMC or Guar gum.

The following table highlights approaches to the proper selection criteria of food gels and their expected functionality:1

According to the FDA, the majority of common baking food gels are considered safe when used following Good Manufacturing Practices. 4

In the EU, the majority of the commonly used gels in baked goods are considered safe when  following Good Manufacturing Practices and are thus considered food additives (e.g vegetable gums) are regulated by EU Commission Regulation No 1333/2008.5