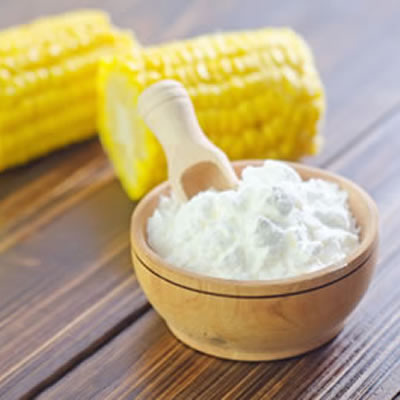 What is Corn Starch?

Corn starch is a fine, powdery substance derived from the endosperm of the corn kernel. It is commonly used as a thickener in puddings, gravies, sauces and fruit compotes, and is gluten-free.

Starch is a storage product found in all plants containing chlorophyll. Both types of starch molecules, amylose and amylopectin, are polyhydroxy compounds which hydrate when heated in water. As the starch molecules hydrate, they increase in size and immobilize most of the free water, thickening the solution towards a paste like texture. For this reason, corn starch is used as a thickening agent.

The use of starch is chronicled in records of the early Egyptians, who manufactured papyrus using a starch coating. Roman records indicate that those early innovators found uses for starch in foods, medicine, cosmetics and fabrics.

It was not until the middle of the nineteenth century, however, that the process for large-scale efficient extraction of starch from corn was developed.1 Corn, on the other hand, is a New World ingredient, derived from an early version of corn known as Teosinte. For this reason, corn used as a starch source is relatively new.

The primary function of corn starch is its thickening capabilities. Powdered sugar and pie fillings are two of the most common baking related items that contain this starch as a major ingredient. It is also able to assist different ingredients in binding together. Starch gelatinization is a vital function of corn starch in baking. Upon adding heat and moisture, starch irreversibly breaks down allowing water or moisture to seep into the granule causing swelling and gelatinization.

Corn starch is mainly composed of carbohydrates. It is a flavorless substance prior to being cooked or baked. It appears clear with no apparent color changes, making it an ideal thickening agent in baked items when no additional color changes or flavor additives are desired.

Research strongly indicates that characterization of molecular weight and branching attributes possess potential for predicting some functionality aspects for corn starches and may play a vital role in establishing relationships between the structure and function of other starches. Amylose has more proportional relationships with pasting and gel textural properties. Amylopectin were predominant in regular and waxy corn starches.2

In order to create corn starch, a wet milling process is used. To start, shelled corn (commonly #2 grade) is cleaned to remove excess pieces of cob, seeds, grit and other foreign materials. From here, the corn is stored in silos until needed. When ready, the corn is moved to a steeper – a large tank filled with warm water and dissolved sulfur dioxide (to combat fermentation), where it steeps for one to two days in order to soften the kernel.

From here, the water is evaporated in order to concentrate and isolate the proteins within the kernel. The kernels are then passed through an attrition mill in order to loosen the hull from the germ. The germ is further refined to produce corn oil. The remaining material, containing the hull and endosperm, are processed through a number of grinders and screens.

After this step, a slurry is created in order to remove the gluten fraction from the mixture. A final slurry is created which contains the starch, from which a white, nearly pure corn starch is produced. This unmodified version can be further refined to create modified starches, a highly specialized form designed for very specific applications.

In powdered sugar, corn starch serves as an anti-caking agent while in puddings. It serves as a thickening agent. Corn starch is also paired with flour in baking formulas to give the baked item greater crumb strength, while at the same time increasing the tenderness of the grain. An important note in the comparison of thickening capabilities of flour and corn starch is that corn starch has double the thickening power than that of flour, so it needs to be included in portions half in size as flour.

Corn starch is gluten-free. Consisting of glucose molecules at its core, it is superior to standard therapy in preventing hypoglycemia (≤60 mg/dL). This therapy may allow patients with GSD to sleep through the night without awakening for therapy while enhancing safety.3 Since corn starch is essentially a simple sugar, there are no significant nutritive dangers in regards to its consumption.

Is Rice Flour a Good Choice for Gluten-Free Baking?