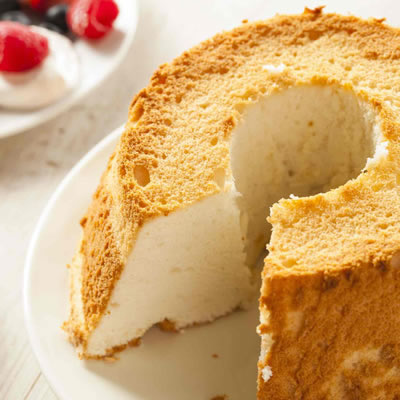 Angel food cake owes much of its consistency to egg whites.

What is Angel Food Cake?

Angel food cake is a type of sponge cake made with egg albumen and without added egg yolks and butter. It is a good choice for low fat or low calorie dessert presentation.

Egg white: leavening agent. The quality of angel food cake is largely determined by the foaming properties of egg whites. When an egg white is whipped, air bubbles are trapped in liquid albumen. After heating, the air bubbles expand and egg white proteins coagulate around them, giving permanence to the foam structure. If egg whites are under-foamed, the volume and texture of the finished product will be less than desired. On the other hand, over-foamed egg white lacks elasticity and cannot expand properly when heated. Egg white with proper foaming properties is desired.2

Cream of tartar: is added to stabilize the egg white. Acid addition lowers the pH closer to the isoelectric point of the foaming proteins of the egg white. There are decreased electrostatic repulsions between proteins near their isoelectric points. Therefore, proteins pack closer at the air/liquid interface in the foam and viscosity increases. The stronger protein films are less permeable to entrapped air, creating a more stable foam.3 Compared to other acids, such as citric and acetic, cream of tartar produces cakes that are much coarser in texture.1

There are several key reactions involved in the angel food cake baking process while the temperature of the batter is increasing:

Research performed to improve the quality of angel food cake has focused on the areas below:

The length of storage of eggs affects the ability of the egg white to produce a stable foam. Egg whites that are several days old resulted in less satisfactory cakes with an open, more porous texture, than cakes made from fresh eggs. When whipped, the older whites form larger bubbles than fresh egg whites. So cakes baked with older whites have an open texture that is not as tender as the tight texture one gets from fresh eggs.1 Oldham (2000)3 found that cold egg whites did not decrease cake quality, eliminating the need to warm egg, decreasing bacteria risk and decreasing preproduction time.3

Flour: Chlorinated cake flour, which is made from soft wheat flour, is used due to its light texture. This is beneficial for leavening and also contributes to the light texture of the cake.

Frozen batter: Hydrocolloids, which have high water retention capacity, can inhibit ice formation and growth and confer stability to the frozen products. One percent carboxymethyl cellulose (CMC) was found to be sufficient to contribute to the quality of angel food cake made from frozen batter and stored for 4 weeks.5