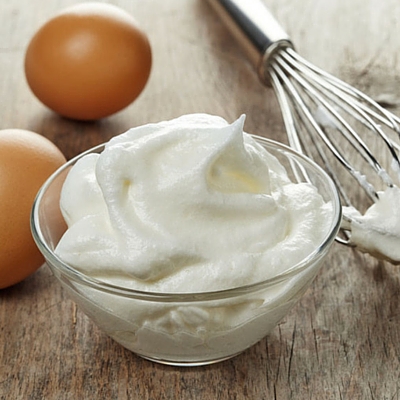 What is Egg White?

Egg whites make up around 60 percent of an egg’s total weight. The albumen, or “white,” consist of a chalaziferous layer which surrounds the yolk, and an inner thin layer, outer thick, and outer thin layer.1 Water is a key component as well.

Solids make up to 12 percent in the albumen. However, it can be slightly less depending on moisture loss and the size of eggs used. Smaller eggs tend to have higher solid levels, compared to larger ones. Therefore, to replace 100g of fresh egg whites, use 12g egg white or meringue powder and 88g water. Typically, pH levels run from 7.6 to 9.3.2

Both dried and liquid versions react very similar in baked goods. Dried egg white powder is beneficial for it’s convenient storage, long shelf life, and it is easier to cook without breaking eggs and separating the yolk. However, the versions liquid are easier to use with in fresh products.

In commercial production, egg whites are treated before being frozen as liquid or dried into powder. Glucose is removed, and then they are clarified, filtered and spray dried before undergoing a pasteurization process at a temperature of at least 130 degrees F or 54 degrees C for 7 to 10 days. To improve gel strength and whipping ability, manufacturers often exceed required pasteurization regulations.4

Powdered egg whites are simply made by dehydrating egg whites and then grinding them into powder. Another method used involves spraying droplets of liquid egg whites into a stream of hot air, instantly creating the dried product without the grinding process.

Sodium lauryl sulfate is sometimes used as a whipping additive, while carbohydrates are added to increase resistance to heat damage.4

Egg white powder can either be rehydrated or left as a powder. For rehydration, mix 2 tsp of egg white powder and two tbsp. of warm water for 1 oz. of egg white. It will take some time to mix, but mix gently to avoid foam. Powdered egg white is often used as a stabilizer for foams or to give baked goods added texture.

Keep dried and powdered egg products in a cool dark place, until reconstituted. Then, use right away or keep refrigerated for four days. Liquid egg whites should be frozen, and refrigerated for a few days after thawed.