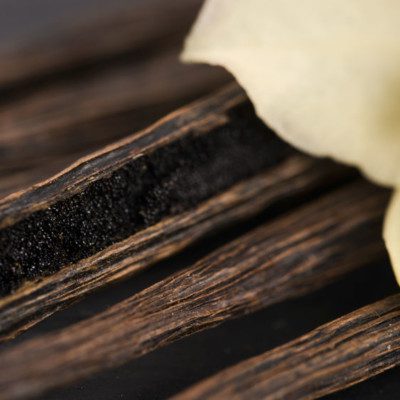 Vanilla is an aromatic flavoring agent obtained from the vanilla bean with vanillin being the principal flavor component. It is the most used flavor in foods and baked goods due to its sweetness and ability to enhance other flavors.1,2

Commercially, it is available in various forms:

Vanilla (Vanilla planifolia) is thought to have originated in Central and Northern America, more precisely Mexico. In the 16th century, it was introduced to Europe by Spanish conquerors. In the US, vanilla has been sold for over a 100 years in supermarkets and retail stores.1,2 Various types of vanilla beans such as Bourbon, Tahitian and Indonesian are known with various flavor profiles.

A relatively new FDA-approved natural source of vanilla is Castoreum, a molasses-like compound obtained from beaver’s castor sacs located between its pelvis and tail base. Due to the tedious extraction process, only very limited amounts are available commercially.3

It is commercially produced through the following processes:1,2,4

Vanilla can be used as a whole bean or in other forms. It is typically added in the final steps of mixing in cakes, cookies and other sweet goods.1,2,3  Vanilla flavor release is most efficient in lipid media.

Vanilla is considered safe by the FDA, when produced following good manufacturing practices. It establishes the composition of vanilla extract at 35% content of ethyl alcohol.5

In the EU, vanilla is regulated by the EU Commission No 1334/2008 like other flavoring agents.6