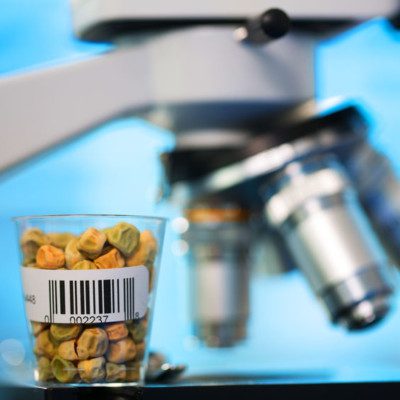 What are Non-GMO Ingredients?

Non-GMO or GMO-free ingredients are from crops that have not been genetically altered using novel genetic engineering or DNA manipulation techniques. These modifications are different from traditional cross-breeding or hybridization.

GMOs are found extensively in major crops grown in the United States, such as:

Genetic engineering has been promoted as a tool to increase agricultural output, enhance plant traits or increase nutrient content. Also, for reducing the usage of fertilizers, herbicides and pesticides.  Due to consumers push back on genetically-modified foods, the non-GMO label was created and used by manufacturers to inform consumers who want to avoid those products.

The U.S. policy regulating biotechnology was established in 1986, and the USDA released guidelines for organic foods in 2002.1 Since GMO foods were first introduced to the market in the mid-1990s, consumers have questioned the validity of risk assessments. Their concerns are for for consumer health and environmental risks, particularly the potential long-term effects.1 Concerns have triggered a discussion on the desirability of labelling GM foods, allowing for an informed choice of consumers.2

Non-GMO certification for products, ingredients and manufacturing facilities is done using a third party. The Non-GMO Project is the most recognized label in the U.S. Its certification follows these steps:

Current USDA GMO-approved crops in the US:

Switching to GMO-free baking can be achieved with organic ingredients. Under the guidelines for the National Organic Program (NOP), 7 CFR § 205.105 of the NOP regulations, the USDA prohibits the use of GMOs as excluded methods in organic production and handling.3

Although GMO-wheat is not approved for commercial production or sale in the U.S. and North America, minor bakery components may inadvertently introduce GMO ingredients to bakery products:

Three government agencies are charged with regulating all stages of the development of GM plants from initial field trials through commercialization.

The USDA controls the importation, movement and confined field trials of GMOs via permitting and notification processes. It evaluates whether the plant is safe to grow. The EPA regulates the evaluation and registration of all pesticidal products including GM crops. It evaluates certain GM plants that are resistant to pests for environmental safety.

The FDA is responsible for regulating the safety of GM crops that are eaten by humans or animals. According to a policy established in 1992, FDA considers most GM crops as “substantially equivalent” to non-GM crops. In such cases, GM crops are designated as “Generally Recognized as Safe” under the Federal Food, Drug, and Cosmetic Act (FFDCA) and do not require pre-market approval.

However, if the insertion of a transgene into a food crop results in the expression of foreign proteins that differ significantly in structure, function, or quality from natural plant proteins and are potentially harmful to human health, FDA reserves the authority to apply more stringent provisions of FFDCA requiring the mandatory pre-market approval of food additives, whether or not they are the products of biotechnology.

Only after the 3-agencies evaluation process is complete are farmers allowed to grow a new GM crop product in the United States.

When the terms “GMO free,” “GE free,” “does not contain GMOs,” “non-GMO,” and similar claims are made on a food label they must be substantiated. False or misleading statements such as “None of the ingredients in this food is genetically engineered” on a food where some of the ingredients are incapable of being produced through genetic engineering (e.g., salt) are not encouraged by the FDA.2,4