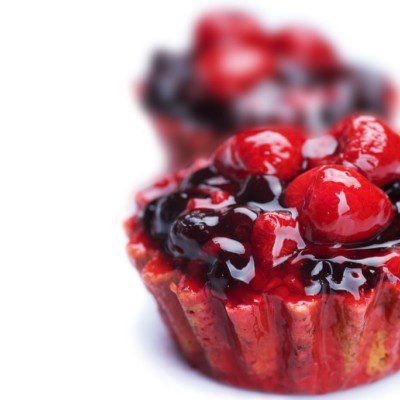 Alginates are natural polysaccharides derived from marine brown algae. They have unique properties which make them a valuable component of many applications.

In foods and bakery formulations, they are used to:

Alginates were first described by a British chemist (Stanford in 1881) as the most abundant polysaccharide in brown algae encompassing up to 40% of its dry mass. It is present in the intercellular matrix as a gel with bivalent ions such as calcium, magnesium, strontium or with monovalent sodium. Since its discovery, they have been used in a wide range of applications such as foods and various consumer products.

The first reported use of this ingredient in the food industry was in the form of a gelling agent in the production of artificial cherries in 1946. Flavored, colored solutions of sodium alginate were introduced to a solution of calcium salt to form large drops resembling cherries. These products were very popular due to their stability and resistance to melting.1

Their extraction process starts with acidification of macerated algal tissue to convert the alginate salt into insoluble alginic acid which is further neutralized with an alkali to form soluble sodium alginates. Separation using sifting, floatation, centrifugation and filtration, or their combinations, can remove the residual algal matter1. The soluble sodium alginate is then directly precipitated by alcohol, calcium chloride or by mineral acid and the resultant is dried and milled. Other soluble variations that are produced include potassium or ammonium alginates.2

Alginates are linear acidic polysaccharides made up of 1-4 linked β-D-mannuronic acid (M) and α-L-guluronic acid (G) residues with varying sequence and composition.2

Molecular weight of commercially-available sodium alginates range from 32,000 to 400,000 g/mol.

The use of these ingredients in food applications is cost driven and ranges between 0.5-1.5% and are used to provide the following functions:

Alginates are essentially non-digestible in the gastrointestinal tract and are poorly fermentable soluble (viscous) fibers. Thus, they do not act as a direct source of energy or nutrition, however they have other benefits such as reduction in nutrition uptake by the small intestine.

Alginates are commonly used in the following applications:

Alginates such as Ammonium, Calcium, Potassium, and Sodium are considered GRAS (Title 21, Part 582). According to Part 184, they can be used in different applications within the following specific limitations:

Know the Flow of your Product