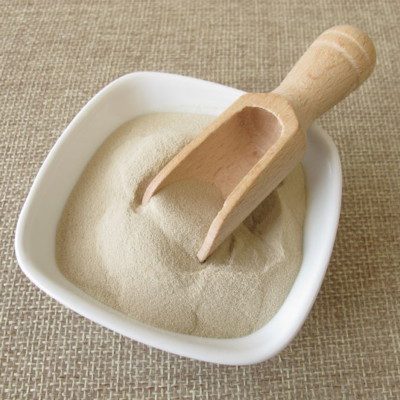 Also known as Agar-Agar and Gelosa

Agar is the dried colloidal polysaccharide extract of certain marine algae which finds use in the food industry for its ability to gel and hold water. A powdered form can be odorless or have a slight odor and is usually white or pale yellow. It is insoluble in cold water but soluble in boiling water. It is considered a soluble dietary fiber and is often used as a replacement for gelatin.

In the baking industry it:

Legend has it that a small town innkeeper in Japan offered a seaweed jelly to a visiting Emperor in the 17th century. Some of the jelly was not eaten and thrown away. The innkeeper found it frozen the next morning and discovered that it was now a low density, crumbly cracked substance that could be reheated to form jelly once more.1

Industrialization of agar in its dry stable form began in the 18th century and was called kanten in Japan. Agar-agar is of Malayan origin and agar is the most widely accepted name, however, it is also known gelosa in French and Portuguese speaking countries.

Since only a small amount is used in recipes, it’s likely to only have a minor effect on the overall nutritional quality of the final product.

Different red algae seaweeds from the Rhodophyceae class can be utilized to make agar. Currently the industry uses the following seaweeds for production:1

Seaweed can be gathered at shore, cut from beds or cultivated. Once it is harvested, it is cleaned, dehydrated, pressed and then extracted for the polysaccharides agarose and agaropectin. Methods of extraction vary. After extraction, it is frozen, dried, milled and screened for use.