The Role of Yeast in Baking, Nutrition and Health

Yeast not only leavens dough and gives it a light, sponge-like texture—it provides flavor, aroma and contributes to the nutritional value of bread. Here’s how it functions in bread, and boosts the benefits of the final baked good.

The carbon dioxide gas produced by yeast expands the dough as it is trapped within the dough’s protein matrix. This stretching results in the light, airy structure associated with yeast-leavened products. The dough matures or develops through the action of fermentation on the gluten structure. Yeasts that are more tolerant and resilient are selected for high-stress processes. The availability of yeasts specifically selected for their ability to survive subzero temperatures has revolutionized the frozen and parbaked sectors.

Bread’s taste and aroma are the result of its ingredients, the aromas originating from the yeast’s fermentation, and the thermochemical reactions during baking. Yeast imparts the characteristic flavor of bread and other yeast-leavened products. Sugars are metabolized when yeast produces carbon dioxide. This produces a spectrum of intermediate metabolites, many of which are precursors for flavor.

Yeast fermentation products that can be detected both in dough and in the finished bread include ethanol and higher alcohols, aldehydes, and organic acids, which are by-products of the yeast’s primary metabolic function in dough. Some of these by-products enhance the rate of browning reactions and the formation of melanoids and caramels in the bread crust. Important substrates for these types of reactions are sugars and amino acids. By contributing some of these substrates, the yeast also influences the eventual taste and flavor of the bread.

The precise nutrient values of yeast can vary with manufacturer. This is why the Canadian Nutrient File and the USDA National Nutrient Database for Standard Reference have conjointly established the nutrient profile of compressed bakers yeast. The Nutrition Facts table on a baked product’s packaging shows the percentage of Daily Values that a bread serving can contribute. 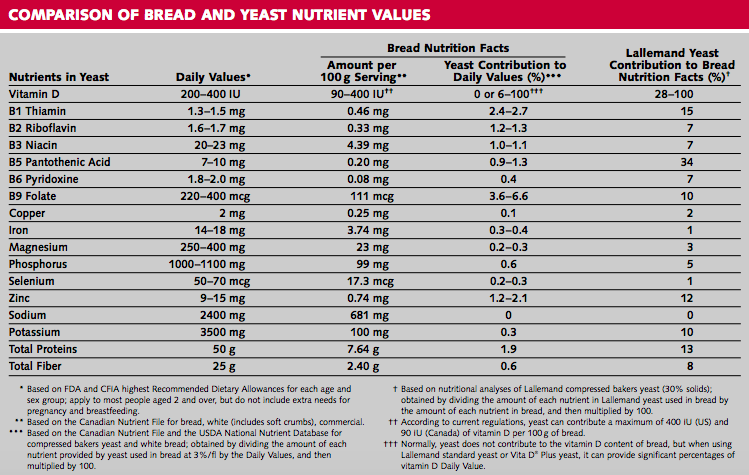 The nutritional and health benefits of yeast

Phytosterols are natural plant sterols that have been shown to effectively lower blood cholesterol, enhance the immune system, and decrease the risk of certain cancers. The lowering of cholesterol is phytosterol’s most documented health property. When exposed to UV light, ergosterol is converted to vitamin D.

Apart from the prevention of the deficiency diseases rickets and osteomalacia, vitamin D is involved in maintaining calcium balance in the body, normal cell division and immune system function, a healthy inflammatory response, and normal muscle function. Bakers yeast typically contains 0.5 percent (w/w) ergosterol, but selected strains can contain up to 1.5 percent ergosterol. The vitamin D level in yeast can be adjusted to any needs.

Soluble in water, the B vitamins found in yeast are structurally dissimilar yet equally essential for normal cellular functions, growth, and development.

The minerals found in yeast are involved in growth, development, energy metabolism, and the reproductive system.

Proteins are the chief actors within the cell, said to be carrying out the duties specified by the information encoded in genes. The best-known role of proteins in the cell is as enzymes, which catalyze chemical reactions. Proteins have recently been recognized for their role in weight management and satiety. They represent more than 50 percent of yeast (w/w).

Dietary fibers play a role in maintaining normal intestinal function and stimulating the immune system. They are also known to act as prebiotic, improve insulin resistance, and reduce serum cholesterol. Yeast typically contains 30 to 40 percent (dry weight) fibers, of which 60% are beta-glucans.

Lallemand continues to innovate its products, by optimizing yeast production processes, to create products that can contribute significantly to the nutritional content of baked goods reviving the 1930’s ‘yeast for your health’ motto.

Bakers can take advantage of this nutritional knowledge when updating their label declarations. The vitamin D content of bread* can be declared when using Lallemand Vita D® yeast, which is a nonfortified and vegetarian source of vitamin D. Lallemand also produces inactivated whole cell yeast (Saccharomyces cerevisiae) products containing elevated levels of specific minerals and/or vitamins.

* Following a petition submitted by Lallemand on behalf of the US baking industry, the FDA has amended the food additive regulations to provide for the use of vitamin D bakers yeast as a source of vitamin D and as a leavening agent in yeast leavened baked products at levels not to exceed 400 IU of vitamin D per 100g in the finished food.

Some bakers already use Lalmin® Se, a yeast rich in selenium used by dietary supplement and food manufacturers, to make their baked goods a source of selenium. Glucans-30, a natural cell wall fraction rich in beta-1,3/1,6-glucans, is also used in baked goods.