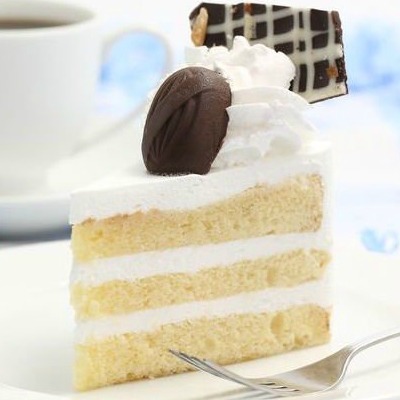 What is White Cake?

White cake is a simple one, featuring a fine, moist crumb. It is commonly used for weddings, birthdays and other special occasions.

The exact origin of white cake is unknown. Cakes have a long history dating back to ancient Greece and Rome, where flat heavy “cakes” were sacrificed to gods. Cake was interchangeable with bread until the middle ages, when it started being used for special occasions. Cakes were seen as a symbol of wealth and were much heavier than they are today. However, the industrial revolution and the introduction of chemical leavening agents such as baking soda and baking powder made them lighter and simpler to bake. The mass production of ingredients also helped lower costs. Cake quickly became a common and favorite dessert.

White cake became tradition for wedding cake due to its pure white color and it is still a favorite for the occasion.

White cake is often confused with yellow cake, but there are distinct differences. The biggest is the use of egg whites instead of the whole egg. This allows the noticeable difference in color. This also makes white cake batter thin and runny, so the final product is very light and close to a sponge-like texture.

Cake flour is recommended for white cake, rather than an all-purpose flour. It has less protein and will make a softer texture. Emulsifiers play a key role as well. They allow for low flour and high sugar and moisture contents. The result is a smooth cake batter, golden crusts, and a fine grain and texture. Three layer white cakes are often used to test the performance of shortenings and margarines.2

When mixing white cake batter, two methods can be used – the conventional creaming method of mixing the butter and sugar before slowly adding in the dry ingredients, or the one bowl method of mixing everything together at once. For a lighter cake, beat the egg whites separately and add them after all the other ingredients have been mixed.