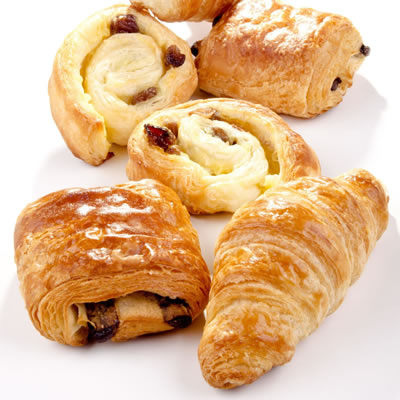 There are a wide variety of pastries.

What is a Pastry?

The term pastry primarily refers to either savory or sweet products wrapped in some form of pastry dough. There are many forms of pastry dough, though the most common is short crust pastry dough. The basic ingredients of pastry dough are flour, sugar, milk, shortening, baking powder and eggs. When these ingredients are combined to form a dough that is flakier or crumblier than bread dough. The high fat content in pastry dough, and how the fat covers the flour used is what leads to a flaky pastry. Presentation is also more highly valued in pastries, therefore there is typically more time spent on making this product. This leads to a more expensive product.

Pastry dough likely originated in Egypt, and there are some written accounts of pastries being served at formal events. The Greeks and Romans are accredited with making the first true pastries. It is likely that baklava, which is made with filo dough, was created in the time of the Roman empire. During the crusades, these pastries were brought to northern Europe and subject to much experiment during the renaissance, especially in France and Italy. The earliest written recipes come from the 1700s, as well as Antonin Carême, the first widely known pastry chef.

When making pastry dough the goal is to reduce the formation of gluten to an absolute minimum. As a result, pastry chefs have taken many precautions. First, pastry chefs prefer solid fats, such as butter and lard instead of oils. This is because these fats coat flour better and prevent gluten formation better then oil. Second, the temperature of everything is critical. Pastries are often made in a separate part of the kitchen, which is kept colder than the rest of the kitchen. Additionally, all of the ingredients and utensils used are chilled before hand, as well as after each step of the pastry making process. It is common to mix on a chilled marble stone, or wooden board. Some chefs even put their hands in ice when mixing pastry dough. The mixing process is kept to a minimum so as to prevent the formation of gluten, and not let the dough heat up too much. Lastly, pastries are typically made with pastry flour, which is a low gluten flour made specifically for pastries. It has 8-10% gluten, which is lower than all purpose flour, but higher than cake flour. This flour is typically not bleached either.