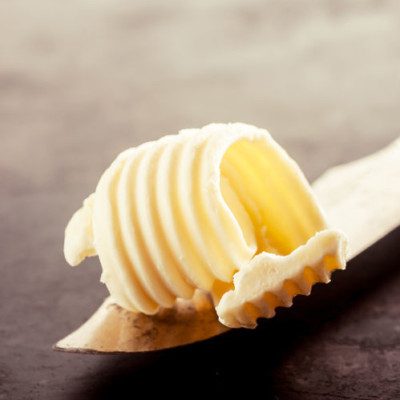 Margarine is a fat used widely as an ingredient or a spread that resembles butter, but is a common butter substitute. It is made from the emulsion of vegetable and/or animal oil. Like other fats, margarine helps improve mouth feel and flavor in baked goods.

Margarine types for commercial baking include:

In the mid-19th Century, European demographics were changing as more people moved to cities. Coupled with industrialization and a recession, butter became difficult to obtain. Imports were unable to fulfil demand, particularly military need. The emulsion of vegetable and/or animal oil was originally invented by Hippolyte Mège-Moriѐs and patented in France and Britain. Soon after the patent was issued in July 1869, a plant for commercial manufacturing was erected in Poissy, France. Manufacturing was interrupted by the Franco-Prussian war.

The substance was originally known as “butterine.” The public regarded it as suspect since it came to be used by less scrupulous people to adulterate butter. However, it grew outside France to be commercially manufactured in Holland, Austria, Germany. The American patent was issued in December 1873.1

The dairy industry waged a long fight against the substance. In seeking to protect milk producers’ interests, the substitute was banned by governments in nations including Canada and South Africa. Consumption increased, eventually overtaking butter in the mid-1950s. Margarine use peaked in the United States between 1970 and 1990. Its use has decreased in light of health concerns, but consumption remains higher than for butter.1,2

As a fat, margarine provides baked goods with texture, mouthfeel, and other sensory attributes. Its other roles include extending a product’s shelf life.3

Margarine’s composition is rigidly dictated and is not to contain less than 80 percent fat.4 Rheologically, it can be in either liquid or plastic form.2

The commercial baking industry has chosen and developed fat blends in order to support specific applications, which means the composition of margarine varies between the United States and Europe as well as by end use. Soy bean oil, for example, is a common ingredient source in the United States.

The industry has also adapted to prevailing nutrition concerns. Margarine once had low saturated fat and high linoleic acid content. Eventually, sunflower seed oil was replaced with soy and/or canola. Concerns about hydrogenated foods, for example, led to the creation of a non-hydrogenated product.5

Fats impart a wide range of sensory characteristics to baked goods. Notably, they are used to improve mouthfeel and flavor. This may vary based on the type of fat used.6

Margarines have been developed that have differing saturated fat content. That content is based on the specific application. Tub-based margarines, for example, have a low saturated fatty acid content while industrial puff pastry margarines have been developed to eliminate the need to pause production in order for the pastry to be cooled.5 Margarine types for commercial baking  include butter cream margarine, cake, croissant, puff pastry, and hard puff margarines. Puff pastry margarine, for example, is tempered to improve plasticity.

The ingredients in bakery margarines can affect the final product. As Gunstone notes, the industry continues to use fats with trans isomers “since they provide the triglycerides with the melting properties that lead to good aeration and plasticity.”5

Experts note that low and zero transfat margarines result in issues such as increased brittleness, poor melt in mouth, less flavor release, and a grainy texture. These fats can, depending on how they crystallize and are used in manufacturing, can cause production challenges. These include reduced throughput and increased labor costs.5

Commercial bakers do not need to list the ingredients for a margarine that has been used;  instead, these may be printed on a technical data sheet.5

Any margarine to be used in the United States must meet the U.S. Food and Drug Administration’s rigid definition described in the Code of Federal Regulations, Title 21, Volume 2.

It must contain no less than 80 percent fat – from rendered animal and/or vegetable sources – and must contain only safe and suitable ingredients. Partially Hydrogenated Oils, for example, which were determined in 2015 to be not Generally Recognized as Safe, cannot be used to make margarine.4