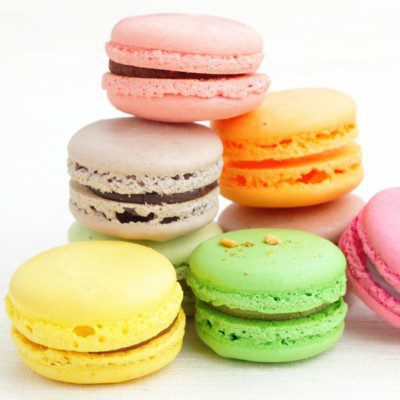 What is a Macaron?

Macarons are a type of cookie that has become popular worldwide. It refers to the French or Parisian egg white foam-based cookie. This cookie is the French take on the original macaroon (hence the name macaron).1

Macarons are small, delicate and meringue-based cookies. They have a crunchy exterior and soft, light, nougat-like interior. Macarons can be recognized by their characteristic slightly domed top and a ruffled base known as the foot.1

The macaroon cookie, being the base for macarons, originated in the 17th century but was transformed by the French to resemble their characteristic modern-day versions during the early 20th century.2

Macarons involve two cookies sandwiched together using ganache or cream. Macarons today can be found with a wide variety of flavors and colors that are only limited by the imagination of the chef creating them.2

How are macarons made?

The French method involves whipping the egg whites to form a stiff meringue followed by folding in the almond flour and confectioner’s sugar, thus forcing the air out of the mix.

The Italian method calls for forming a meringue by whisking the egg whites with a hot sugar syrup. The almond flour and confectioner’s sugar are mixed with raw eggs to form a paste, mixing the meringue and paste form a stable macaron base. This method is commonly used in restaurants and food service establishments.

Macarons are notoriously finicky to process. Small variations in recipe or process can lead to drastic changes in the final product. Important considerations for manufacturing consistent quality macarons: