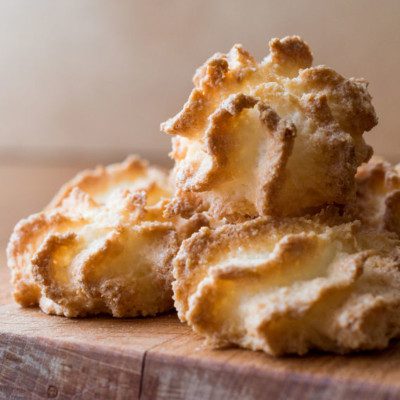 What is a Macaroon?

Macaroons are small, round cookies based on ground or flaked coconuts. They are distinguished for their brownish caramelized color, crunchy texture and somewhat dome-like surfaces.1

The name is applied to a wide variety of cookies or confections made primarily of egg whites and almond powder. Coconut powder can also be substituted or used in combination with the almond powder.

Macaroons are said to have originated in Italy, particularly Venice, during the Renaissance. The name is derived from the Italian maccherone and the venetian macarone, meaning a fine paste, from which the word macaroni is also derived.1,3  In the U.S., coconut macaroon variations are more popular while the almond macaroon variations are more popular in Italy, France and other parts of Europe.2

They  first appeared in Italian monasteries as early as 791 and legend has it that they used to be made in the shape of monks’ navels. These early versions were most likely a crunchy cookie with a soft interior made from almond paste, egg whites, and sugar. The recipes for macaroons spread slowly, with the first accounts occurring in France in 1533. The first recipes for these treats were not recorded until 1725.1

How are macaroons made?

Macaroons are quite simple to prepare. Most recipes involve foaming egg whites and sugar to the desired stage and then folding in the inclusions before depositing and baking the batter.

The following formulas demonstrate the process for preparing coconut-based macaroons:

There are hundreds of variations of macaroons throughout the world. Every region has adopted its own style or formula. Some popular inclusions are chocolate and coconut, which is common throughout Europe, North America, and Australia. In India cashews are often used.

The Spanish type is made with hazelnuts and honey often added to the recipe. All these variations have led to an inconsistently defined product. For example, in the United States, macaroons are dense and chewy, while in France, they are light and airy, and often made without coconut.

Sustainable Chocolate in the Baking Industry