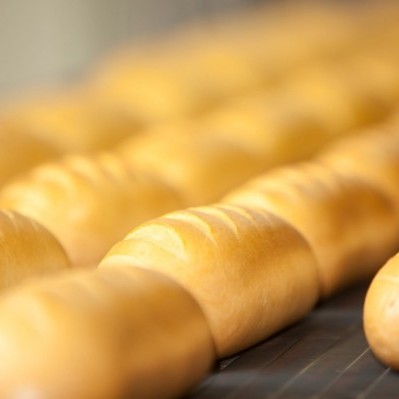 What is Continuous Mixing?

Continuous mixing is a type of bread production system intended for high-speed bakers specialized in producing very large quantities of bread, buns and other baked goods. The main characteristics of continuous mixing:

Pre-mixer
In this stage, dry and liquid ingredients (all in bulk) are fed into the premixing chamber for even distribution of water, and proper hydration of the flour and other dry minors and micros. In the case of preferments, the liquid preferment or brew is pumped into the premixing chamber, where the remaining flour and other ingredients are metered in. The premixer has an endless screw, auger or paddles connected to a shaft that provides the initial blending of the dough. The mixture does not experience an increase in temperature while in the premixer.

Developer
A slow-moving auger in the premixer moves the dough into the developer, an enclosed mixing chamber or barrel usually jacketed for temperature control. The developer takes the place of conventional horizontal and vertical mixers, as it mechanically develops the dough using endless screws or augers. As the dough is pushed through the shaft pins, it is developed and aerated. Dough temperatures usually reach 32–38°C (90–100°F). High-speed rotating screws, moving up to 500 rpm, bring about rapid dough development. This pressure, high friction and shear force from the high rpm generate the high-temperature dough.

In a batch mixing process, these four operations often are treated, designed and implemented separately. Measuring the flour is the responsibility of the bulk delivery system. Measuring other ingredients (e.g. micros and yeast) is often done by bakery personnel that are designated to deliver ingredients quickly but not necessarily accurately. The dough once fully developed exits the mixer in a large batch that requires extended time to divide.

Continuous mixing, on the other hand, integrates all four operations into a single process. Bulk delivery, metering, mixing and dough handling stop are eliminated. Dough is discharged from the mixer as a continuous stream rather than one large batch every 10 to 15 minutes. It is this integration of key operations that allows continuous mixing to supply a more constant stream of dough to the oven.

This technology is recommended to bakers who

Continuous mixing systems need to be limited to a maximum of one or two major changeovers per day. Changeovers are periods of time in between production runs during which the equipment must be washed down before another dough can be made. Reasons for changeovers include allergens, different product color, fruits and bran inclusions, etc. Minor changes, however, where the second dough can push out the first dough, are well suited for continuous mixing.