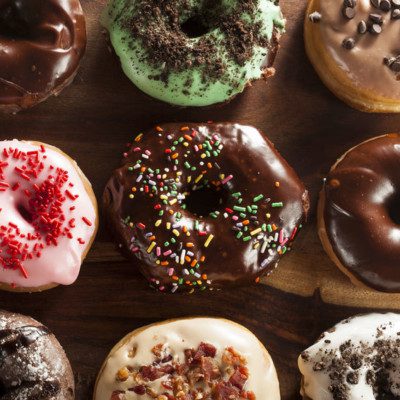 A donut, also called doughnut, is a kind of fried dough confectionery. Donuts are typically ring shaped with a hole in the middle. Bakers also make oval shaped donuts, which are often filled with custards or fruit preserves.

The most popular type of donut is a circular one covered in a plain glaze, but there are numerous variations including:

This sweet comfort food first appeared in cookbooks during 1803, and was officially termed “dough nut” in 1809. By 1900, doughnuts were being referred to as the more common “donut” in the United States, because it is an easier spelling and ease of pronunciation. Nowadays, they represent 8% of total in-store bakery sales. The donut market alone is a $3-4 billion business in the U.S.1

These products are divided into two general classes:

Figure 1 is the schematic for donut dough preparation.2 The dough pieces are then fried in a deep-fat fryer. Frying operation are carried out at 375oF or 190oC. The oil is preheated 1 hour prior to frying to ensure that the oil temperature is stable and constant. Used oil is replaced with fresh oil after four frying batches.

Yeast-raised donuts absorbs less oil than the cake variety, at about 9.96%2  lower in oil content.  The higher oil uptake in cake donuts could be attributed to the production of water during the chemical reaction and its departure from the dough. This porous structure is immediately replaced with the oil. In both cake and fermented donuts, oil uptake is at its highest at the first few seconds of frying. Oil penetration occurs where water has evaporated.3 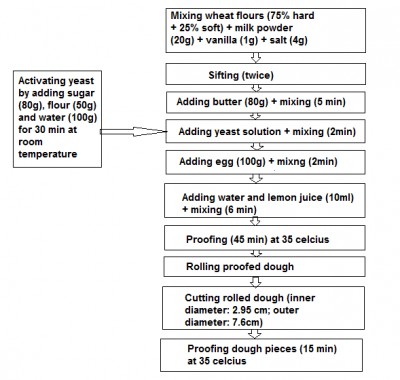 Donuts, as a deep-fat fried food, have a high fat content. High consumption of lipids and fats may result in diet-related problems such as coronary heart disease and obesity. Being overweight is a risk factor for cardiovascular disease, diabetes mellitus or other common diseases. Several possible ways to lower down the oil content in donuts are based on:

Using hydrocolloids as coating is a method for reducing oil uptake in fried products because of their preventive properties. Zolfaghari (2012)2 studied coating donut with methylcellulose (MC) and gum tragacanth (GT) and found that both MC and GT coating are capable to reduce lipid content of fried dough during frying time, while GT coating is more effective than MC coating and coating had no significant effect on moisture content, density and sensory evaluation of fried donuts.