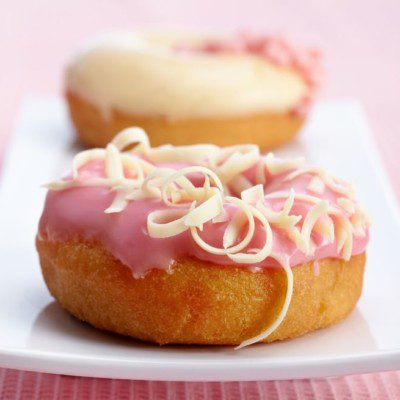 What are Cake Donuts?

Cake donuts are amongst the most iconic and most popular U.S. bakery products. They are made from a cake batter that is chemically-leavened and fried to develop its traditional taste and aroma.

Given their formulation and processing, cake donuts are one of the most challenging bakery products to manufacture.

The origin of donuts is not very clear. However, there is some evidence that these sweet cakes were originally made in Holland in the 19th century in the form of round cakes. Upon frying the outer part of the donuts developed a brown color while the inside remains uncooked. Attempts to rectify this drawback, Dutch bakers stuffed the cakes with fruits and nuts which did not require cooking.

Later in 1847 an American ship captain, Hansen Gregory, found a better solution by punching a hole in the doughnut dough to eliminate the uncooked center. Donuts did not become a significant bakery product until the 1920s, when the first automatic doughnut machines became available.

Currently, hundreds of millions of donuts are enjoyed. It is estimated that 3 pounds (around 1.5 Kg) of donuts are consumed per person each year in the United States.

How are they made?

Cake donuts can be produced from scratch or by using commercial mixes containing all dry ingredients. Mixes are preferred by high-speed operations and some retail bakeshops. The following formula uses doughnut mix (ready-to-use dry blend):

* Pre-blend and dispersion of oil / melted shortening with emulsifier. Mixture is then sprayed and incorporated into the other dry ingredients.
** Based on total mix weight.

Cake doughnut production proceeds at very fast rates leaving a very small window between mixing and frying stages, so proper scheduling of the operations is a must. The batter dropped into the frying fat must rise to the surface (become less dense) very quickly so that it can be conveyed at the surface by the flights of the continuous fryer, or the next batter piece will be dropped on top of the previous deposited donut.1

Ways to reduce or limit fat absorption during frying:1,2