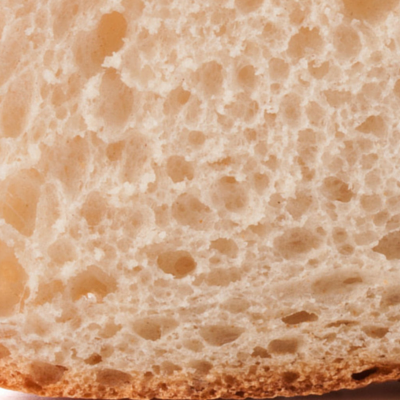 What is Crumb Analysis?

Crumb analysis is the visual quantification of the sliced surface area of a baked product. This technique is used to observe the internal cellular structure of yeast- and chemically-leavened products to help assess their texture, sensory and eating qualities.1

Main attributes determined by crumb analysis of breads and other baked goods include:2

Traditional sensory evaluation of bread has relied on human panels which are time consuming, expensive and have a subjective nature of scoring. With the advancement of photography and computer vision analysis, large bakeries have gradually moved to more objective methods for describing textural properties of baked goods.

The earliest published work on crumb analysis using computer vision technique was in 1992 by Bertrand and co-workers who correlated the crumb cell size and shape with the bread’s textural properties. Their study identified two-phase materials in the crumb, namely a solid phase (cell wall) and an air phase (air).3 Today, one of the most reliable imaging tools for crumb analysis that has become available to bakeries in the early 2000s is the C-Cell system. It originated in the UK and was quickly adopted by bakeries in Europe, the US and other industrialized countries.

As an essential tool in Quality and R&D programs in large bakeries, crumb analysis is used to indicate possible inconsistencies in the ingredients or process of making breads and other baked goods. Since this analysis is not quantifiable by the human eye, it is done using image analysis techniques.

Uniformly sliced breads or cakes are photographed using a suitable camera with adequate resolution and under proper lighting. The captured images are digitized for subsequent image processing. Critical crumb attributes such as cell size, structure, color, uniformity, etc. are evaluated using computer programs based on pre-selected algorithms and compared to standard crumb scores. Here are examples of what the images look like for a slice of bread and a burger bun:

The AACC method 10-18.01 for evaluating crumb structure of baked goods relies on C-Cell Baked Product Analyser. Two models are available, C-Cell Mono & C-Cell Color, both running on the same software platform. The Mono and Color models measure 48 different parameters such as: dimensions, shape, cell size, elongation & orientation. The Color model has additional capability of measuring crumb / crust color and thickness as well as bespoke features for example quantifying cherries inside a cherry cake or sesame seeds on a burger bun.3

Here is an excerpt from a sample report: 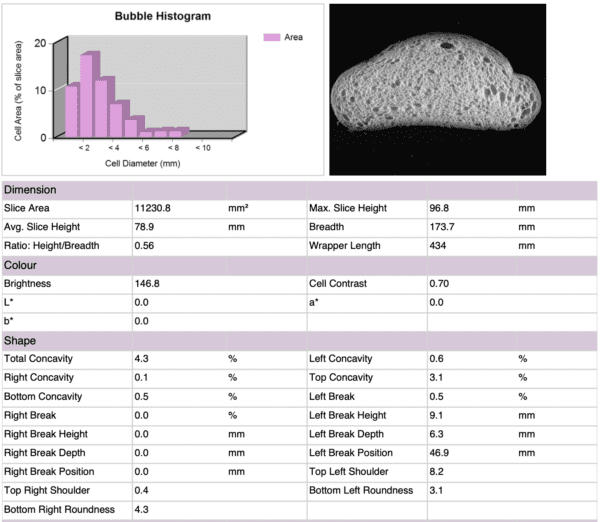 Bakery products have a characteristic shape and definite texture that is expected by consumers. Any significant deviation from optimal characteristics of the product is often considered a quality defect. Textural and sensory properties of baked goods are defined by the crumb’s three-dimensional structure that is created by microscopic and macroscopic components of the formula.

Image analysis has focused on the following variations in baked goods formulations: