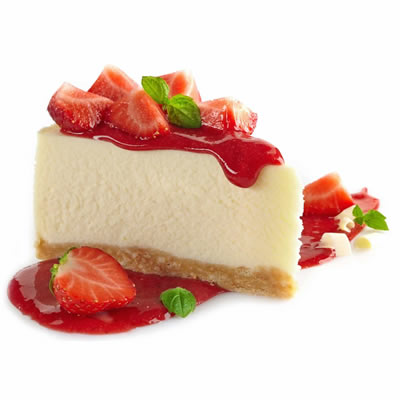 Cheesecake is a pie or torte that is made all throughout the world. While it is called cheesecake, it really does not fit the definition for cake very well. Instead, it better fits the definition of a pie or torte. Almost all recipes in the United States and Canada feature cream cheese as the primary ingredient.

Some claim cheesecake as a torte because the large number of eggs are the only leavener in the cake. Others point to it as a pie because the filling is made separately from the crust and then poured in. Regardless of its classification, cheesecake is a thick and creamy dessert with a dense texture and an either sweet or tangy flavor.

Cheesecake has become so popular in the United States that July 30 is considered National Cheesecake Day. Mentions of cheesecake date back to ancient Greece where Aegimus wrote a book on the art of making cheesecake. He originally called his dessert placenta, and it was made as a sacrifice to the gods.

Ancient Rome adopted this similar dessert and also used it in religious ceremonies. These desserts were much different from modern cheesecakes. Recipes continued to evolve over time throughout Europe. Cream cheese was not invented until 1872, therefore many Americans claim that true cheesecake did not exist until after this time.

There are many variations on cheesecake depending on country, region, and flavor preferences. Common additions in the United States, Canada, Ireland, and the U.K. include various fruits, compotes, nuts, and sauces made from chocolate and coffee. In New York, sour cream is commonly added to give a distinct tangy flavor and thicker texture. Chicago features a style of cheesecake that is firm on the outside, while thick and creamy on the inside.

France prefers a lighter cheesecake that has gelatin mixed in. Italy is also famous for their cheesecake, which uses ricotta cheese and honey. In Germany, Bavarian baked cheesecake is internationally renowned. This type is made with quark, a type of cheese made from sour milk. Japan is famous for adding green tea to their cheesecake, giving it distinct bitter aftertaste. Brazil typically finishes their cheesecake with a layer of guava on top.

Making cheesecake is a fairly simple process. Eggs, egg yolks, sugar, and soft fresh cheese such as cream cheese, mascarpone, or ricotta, are in nearly every cheesecake. Some cheesecakes also feature vanilla or lemon for flavor, as well as sour cream and gelatin for different textures. The filling is made by combining these ingredients and pouring them into a premade crust.

Typically, the crust is made of crushed graham crackers and butter pressed into a spring form pan. Some variations on this include pie crust and sponge cake for use as well. Almost all cheesecake is made in a spring form pan that is removed before serving.

In the United States, most recipes call for baking cheesecake for at least some amount of time, though this is not always the case.