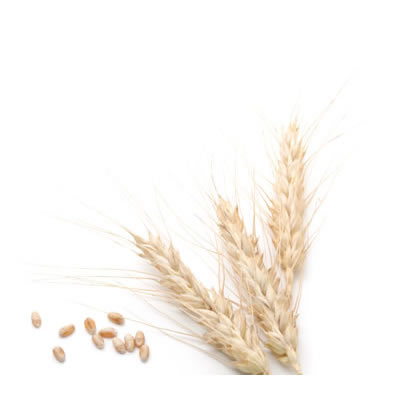 Wheat (Triticum aestivum L.) is one of the world’s most important food crops. Its prominence among other grains and cereals is due to its cultivation adaptability and high yield, as well as its unique viscoelasticity and dough forming properties.

Wheat is often associated with bread. However, it’s also used in making various products such as:

Wheat was cultivated about 10,000 years ago and is believed to have originated in the Fertile Crescent, along with other staple crops.2 Within a few short millennia, it spread into other parts of the world. In the U.S., it was first grown off an island of Massachusetts in 1602.

Earliest cultivated forms were mainly landraces selected by farmers from wild populations, presumably because of their superior yield. Recent domestication efforts were based on the  selection of genetic traits that are crucial for the grain’s ease of processing and functionality such as:3

The primary basis for differences in how wheat is used essentially comes down to grain hardness, a texture characteristic caused mainly by a specific ‘hardness’ gene expression. Other less direct factors include growing conditions, moisture, lipids, pentosans and protein content.1

In addition to durum, four main classes can be distinguished:

Viscoelastic characteristics of wheat flour are due to the gluten protein complex formed from the major storage proteins, glutenin and gliadin. These are found in the endosperm. Molecularly, glutenin is the main wheat flour component responsible for dough cohesiveness and elasticity. As baking commences, gliadins react with glutenin. This sets the loaf structure.4 Similar textural changes are prevalent in soft wheat processing and cookies/cake formation though to a lesser extent.

Wheat processing generally includes hydration and shearing steps, in which flour is converted to viscoelastic dough, and a heating step, during which the gluten protein structure sets.

During pasta production, drying and subsequent boiling prior to consumption generate the desired pasta quality.

Compared to other cereals, wheat has a positive nutritional profile, as it is high in protein and dietary fiber. It is also a good to excellent source of many micronutrients, notably B-vitamins, iron and zinc.

Similar to other whole grain foods, wheat has gained increased consumer interest, a result of the proliferation of epidemiologic studies showing protective effect, mainly the fiber component, against many western diseases such as obesity, high cholesterol levels and many others.5

Although high in starch, the nutritional importance of wheat should not be underestimated. This is especially important in less developed countries where bread, noodles and similar foods provide a substantial proportion of the diet.

However, wheat products are also known or suggested to be responsible for a number of adverse reactions in humans, including gluten intolerances (celiac disease) and allergies.

In the baking industry, wheat is utilized primarily in the form of flour. It enables a light, airy, soft loaf of bread because of gluten proteins. Other uses include cakes, cookies, pastries, pasta, etc.

The cohesive properties of gluten proteins provide for their ability to entrap carbon dioxide and water vapor during leavening, causing the loaf to rise. These proteins can also be isolated in the form of concentrates or isolates to be used in the production of texturized proteins used in snacks and cereal products or as meat extenders or replacers in vegetarian diets. Wheat proteins can also be hydrolyzed to improve their solubility in nutritional beverages or snack bars.

Wheat starch, generated by wet-processing, is favored for its purity, desirable color, paste viscosity as well as gel strength essential for their applications as thickeners. This fraction can also be modified to produce instant starches.