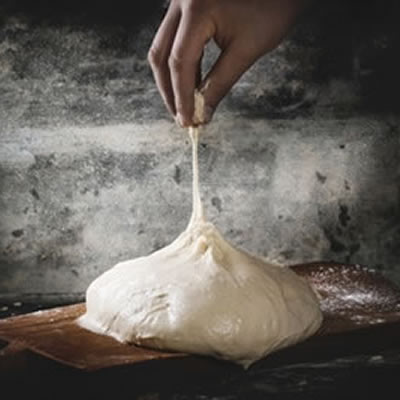 Gluten is unique to wheat, rye and triticale. As a storage protein, it serves to provide a reserve of amino acids for the developing seedling when germination occurs. When wheat is milled into flour and mixed with water, it forms a dough with unique viscoelastic properties. It’s capable of retaining gas which makes it suitable for the preparation of leavened bakery products.1

is unique among cereal proteins based on its ability to form a cohesive and viscoelastic mass. This rheological property makes it a dynamic material that is able to grow and keep the gasses within the dough during extended fermentation periods. The viscoelastic nature also provides the oven spring (increase in height due to the expansion of gasses) that we see in the oven.

Gluten uniquely holds three characteristics: elastic, viscous and extensible. Its elasticity is dependent upon hydrogen bonds and entropy within it’s gluten molecule, which makes it acts like a spring when it is slightly extended.2  The viscous flow is thought to happen via the thiyl-disulfide interchange.  This can be seen when a dough is given floor time and relaxes. When it flows this way, it is thought that the movement of gluten molecules happens via hydrogen bond and hydrophobic bond interchange. The presence of tiny gliadin proteins, amidst the gluten fibers, help the gluten flow by acting like ball bearings repelled by its hydrophobicity. Lastly, a characteristic of gluten is its extensibility.  This is the ability to stretch without breaking.3

Commercial wheat gluten is obtained using wet milling. During the process, wet gluten is extruded into small pellets and injected into a ring, or flash drier, and subsequently dried by hot air. The drying process is the most critical phase, as heat has a negative impact on gluten functionality which reduces the vitality of the wheat gluten.4

Commercial vital wheat gluten is roughly 73% protein (78% dry basis), 6% total fat, 6% moisture and <1% ash.3 The major components of wheat gluten consist of gluten and gliadin. Wheat gluten is sometimes referred to as a protein-lipid-polysaccharide complex because it contains, on average, 72.5% protein (77.5% dry basis), 5.7% lipids, and 10-15% starch including 6.4% moisture, 0.7% ash and minor amounts of dietary fiber.

Due to its cohesive and viscoelastic properties, gluten’s main function is a strengthener.5 It is also a film former, binder, texturizer, fat emulsifying agent, processing aid, stabilizer, water absorption and retention agent, thermosetting agent, and an agent for flavor and color. In bread dough, its interaction with starch is believed to be the main contributor to the viscoelasticity of bread dough.6

How can you improve gluten strength in flour?

Excessive use of wheat gluten would result in drier doughs that have a hard time with pan flow, and a higher than normal oven spring.