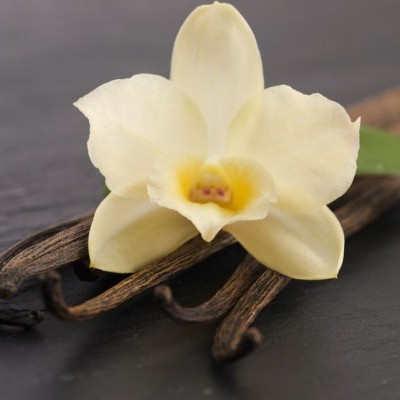 Vanillin is the primary component of the extract of the vanilla bean.

Vanillin is the primary component of the extract of the vanilla bean. It is used as a flavoring agent in foods, beverages, and pharmaceuticals. It is a phenolic aldehyde, an organic compound with the molecular formula C8H8O3.

The history of vanillin begins with Cortez, the famous Spanish conquistador, who is said to have been served a chocolate drink flavored with vanilla by the Aztecs around 1520. He brought the knowledge of both chocolate and vanilla back to Spain and Europe, where they rapidly became popular. Gobley, in 1858, was the first to isolate and identify the vanillin constituent of the vanilla bean and to confirm that this was the chief flavor environment.

The vanilla aroma was so popular that in 1875, less than 20 years from its initial isolation, synthetic vanillin became available in France and the Unites States. 1 Vanillin was first synthesized from eugenol, which is the essential oil from cloves, then lignin and then guaiacol. Currently, around 20, 000 tons are produced per year.

The worldwide production of natural vanilla extract is 40 to 50 tonnes per year, which represents less than 1% of the total vanillin production.1 Vanilla beans are harvested from species of the Vanilla orchid, a tropical climbing plant grown in Mexico, Madagascar, Java, Reunion, and Tahiti. Each vanilla orchid must be manually pollinated to attain reasonable yields. Hand pollination is very laborious and discourages the cultivation of these plants at a very large scale. The cured vanilla pods have vanillin at a concentration of 1.0-2.0% w/w.3 When vanillin is produced from vanilla beans by this process, the labelling on the consumer product maybe indicated as “natural vanilla flavor”, which is a powerful marketing argument.

Around 85% of the world supply is produced from petro-based intermediates, especially guaiacol. Vanillin is produced by condensation of guaiacol with glyoxylic acid followed by oxidation of the resulting mantellic acid to the corresponding phenylglyoxylic acid and, finally, decarboxylation continues to be a competitive industrial process for vanillin synthesis. Currently, guaiacol is synthesized from catechol, which is prepared by acid-catalysed hydroxylation of phenol with H2O2. Glyoxylic acid is obtained as a by-product in the oxidation of glyoxal with nitric acid.4

Vanillin, the synthetic flavoring substance, is generally recognized as safe for their intended use, regulated by FDA in the Code of Federal Regulations (Title 21 Part 182.60).5

Advantages of the Sponge and Dough System

Create Your Own Signature Baked Products