What is Malic Acid?

Malic acid is one type of dicarboxylic acid and is the predominant acid in apples and other fruits. It is a multifunctional food additive that is used in the following food and beverage categories:

Malic acid is an alpha hydroxy organic acid which is widely found in fruits, such as apples, cherries, plums, and vegetables. This acid is sometimes referred to as a fruit acid or, more specifically, an apple acid.

As part of metabolic pathways, it is naturally found in every living cell. 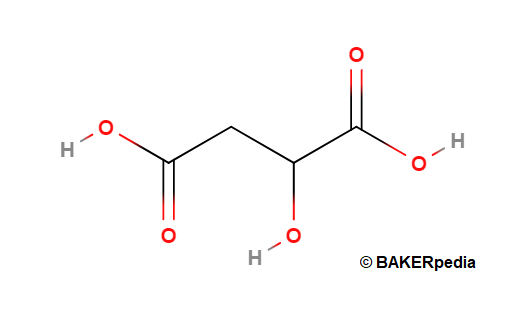 Functions of malic acid include:

It is commercially produced via large-scale fermentation and downstream processing.

Rhizopus oryzae and Aspergillus niger are almost always the preferred microorganisms used for organic acid production. These fungi are capable of producing different types of organic acids as primary metabolites.

Various residues from agriculture and industry can be used by different microorganisms as fermentable carbon sources. Such residues include cassava bagasse, coffee husk and pulp, apple pomace, and soybean and potato residues.

How does malic acid compare to other food acidulants? Here is the relative sourness, in arbitrary units, of malic and other organic acids compared to citric acid:

Characteristics and properties of malic acid1

Malic acid and its salts have been confirmed by the U.S. FDA as GRAS. It can be used at levels not to exceed good manufacturing practice as a flavor enhancer and acidulant as well as a pH control agent at levels varying from 6.9% for hard candy to 0.7% for miscellaneous uses.2

Similarly, In the EU, malic acid (E296) is allowed as a food additive with no limit on daily intake when used following good manufacturing practice. 3

BAKED in Science S2E31: Baking with Natural Colors and Flavors

Get Creative with Cellulose Fiber

Working with Preferments, pH and TTA

BAKED In Science S2E25: Hot 2019 Trends for the Baking Industry