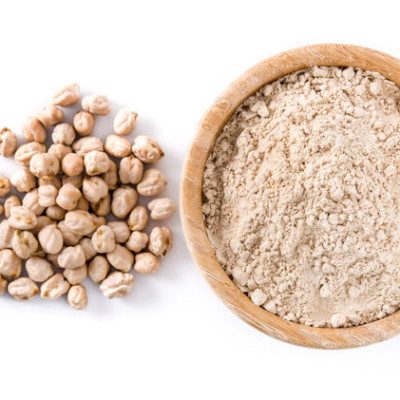 What is Garbanzo Bean Flour?

Garbanzo flour or chickpea flour is a gluten-free powder made from garbanzo bean milling. It is a white variety of chickpea bean (Cicer arietinum L.) that is high in protein, starch and dietary fiber.

Common uses of garbanzo flour include:1,2

The origin of garbanzo beans dates back 5000 years to Mesopotamia.1 Its cultivation started In the 16th century which then expanded to subtropical regions of the world with the Spanish and Portuguese explorations.1,2

This flour provides 367 kcal per 100 g. It is also a good source of dietary fiber and minerals such as magnesium, iron, copper and zinc. Consumption of garbanzo beans may help reduce cholesterol and blood sugar level.1,2

Garbanzo bean flour is commercially manufactured through the following process:2

Garbanzo bean flour is used as a partial substitute for wheat flour, to reduce gluten content and as a nutraceutical ingredient due to its high plant-based protein content. It is typically mixed  with dry ingredients such as wheat flour. Garbanzo bean flour is commonly used in gluten-free baking often in combination with other gluten-free flours.1,2

Usage levels of this flour and its effect on several baked goods are listed below:1,2

In the EU, garbanzo bean flour is considered safe as defined in the EU Regulation No 1308/2013.5