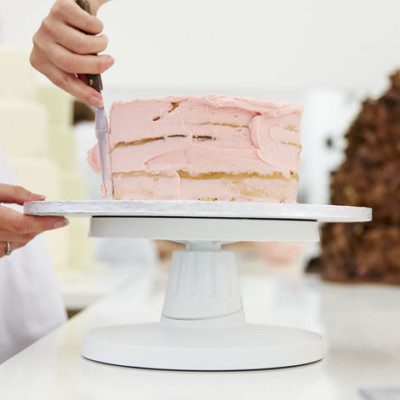 Frosting is a sweet topping that accompanies many baked goods, especially desserts. In its most basic form, frosting is the combination of sugar and some liquid such as water or milk, but there are hundreds of variations of frosting including blends of egg whites, butter, and a multitude of flavorings and colors.

The primary functions of frosting are to improve:

The first published recipe for frosting was found in The Experienced English Housekeeper in 1769, and was attributed to Elizabeth Raffald.1 However, frosting is thought to have been around a least 200 years before the publication.

Originally, frosting was most likely applied to cakes which were placed back in the oven momentarily to harden and be given a sheen. It also increased the shelf life of some baked goods. The first buttercream frosting was made in Germany in 1915 and is now one of the most popular types of icing in the world.

There are many variations of frostings, which can have additions of food coloring or flavorings. The more common varieties include:

Buttercream
This frosting is one of the most popular types of frosting in the United States. It is sweet, creamy and rich. The texture is good for coating as well as piping and decorating.

Commercially it is available in pails in both white vanilla and chocolate flavors, as a mix in which water is added and as a mix into which butter is added. Ingredients can include sugar or corn syrup, shortening or butter, water, milk,  butter flavor, milk proteins (such as sodium caseinate), salt, mold inhibitors (potassium sorbate), emulsifiers (polyglycerol esters of fatty acids, soy lecithin, polysorbate or alpha-cyclodextrins), stabilizers (guar or xanthan gum), citric acid and colors.

Foam Type Icings
These are boiled icings that are basically meringues made with boiling syrup. These icings can contain stabilizers such as gelatin and are often applied in thick layers with swirls and peaks.  They are best used the day they are prepared.

Royal Icing
Also called decorator’s icing, it is good for intricate piping or flooding, depending on the consistency. It dries hard with a smooth hard matte finish and is commonly used to decorate sugar cookies and make shaped decorations to be used at a later time. Food coloring can be added to produce a wide range of colors, but it is often white.

Flat Icing or Water Icings
These icings are just simple mixtures of sugar or corn syrup and water.  Sometimes flavorings are added. These mixtures are heated and applied to items such as coffee cakes, Danish pastries and sweet rolls.

Glazes
They are like flat icing, but with additional sugar. They are a transparent coating for a baked product which add shine and protect from drying. There are chocolate and gelatin based glazes. Chocolate glazes included melted chocolate and additional fats while gelatin glazes often include fruits.

Rolled Coatings
This includes fondant, marzipan and modeling chocolate, and are applied by rolling into thin sheets and draping over the cake to give a flawless finish. Prior to applying the icing sheet, a glaze or thin layer of buttercream frosting is applied to help with adhesion.

Commercial suppliers will be able to provide an ingredient and nutritional datasheet upon request.

Frostings improve the appearance and flavor of cakes and baked goods. They provide bakers an opportunity to express their imagination and artistry.