Working with Preferments, pH and TTA

Preferments are an essential part of the breadbaking process, impacting key attributes and development. To optimize your preferment, and final product, you’ll need to understand how preferments work, and the role pH and TTA plays in them.

Preferment is the general term for the sponge or brew step that is used at the start of many bread making processes. There are three basic types of preferments made with commercial bakers yeast that are most used by industrial bakers:

However, all preferments have the same key roles:

Let’s look at these more closely.

Commercial baker’s yeast is made up of dormant yeast cells that go through a lag phase before producing carbon dioxide gas at their highest rate. The preferment minimizes the lag phase by providing an optimum environment for the yeast. The result is higher gas production later in the process, especially in high-sugar doughs. Yeast activation can be monitored in the laboratory by counting budding yeast cells or by measuring gas production, and in the bakery by checking final proof times and loaf volumes.

Yeast activation takes place during the first thirty to sixty minutes in all types of preferments.  Longer preferment times are not necessary for yeast activation and can have a negative effect because yeast starts to lose activity once the available sugar has been consumed. The only reason for longer preferments is for flavor contribution or dough development.

Bread taste and flavor precursors are produced in the preferment mostly by the yeast. In short preferments inoculated with only commercial bakers yeast, the low levels of bacteria present in the yeast and flour do not have much of an effect. The precursors include alcohols and organic acids that react with other compounds during baking and contribute to the taste and flavor of the finished product. The flavor contributed by water-brew systems is minimal and increases with the amount of flour present in flour brew and sponge systems.

Flavor contribution can be monitored by measuring the TTA (total titratable acidity) in the preferment—the higher the TTA, the more flavor. The optimum TTA depends on the product, and higher levels can cause a sour off-flavor. TTA and flavor contribution in the preferment can be controlled by varying the time, temperature, and ingredient factors that affect yeast activation.

Dough development in the preferment is important because it affects the mixing, consistency, and gas retention of the final dough, which in turn affect the volume, texture, and overall quality of the finished product. The preferment affects dough development mostly by lowering the pH, which activates proteases and other naturally-occurring enzymes in the flour. Proteases break down gluten irreversibly. Proteases also decrease mix time, increase elasticity, and can improve gas retention, but with a trade-off for less tolerance.

It is also affected by the water in the preferment hydrating the starch and gluten, and by the physical and chemical effects of the alcohol, carbon dioxide, and organic acids. 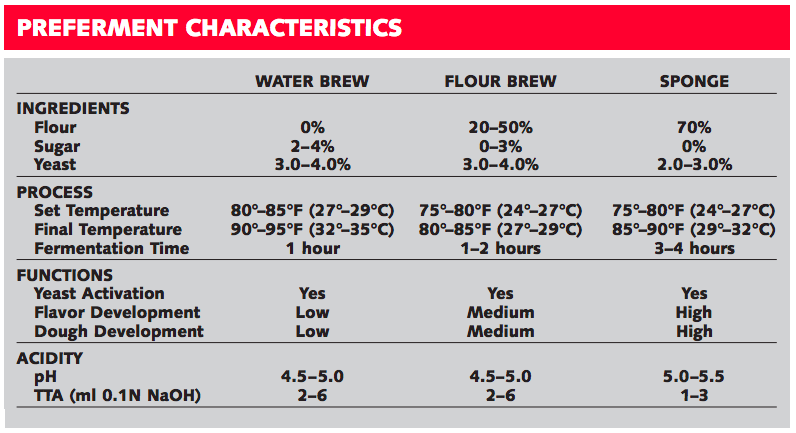 How to Optimize your Preferment

Optimizing the preferment for a given breadmaking system can require trade-offs because fermentation affects gas production, flavor contribution, and dough development at the same time but not in the same way. In practice, dough development usually takes precedence.

Here are some recommendations for optimizing preferments, with an emphasis on the factors that affect dough development:

The role of pH and TTA: the secret to fermentation

Bakers measure pH and total titratable acidity (TTA) to monitor the progress of fermentation in a preferment. There is a correlation between fermentation and acidity because the yeast and bacteria in a preferment produce carbonic and other weak acids. When a simple acid (shown here as HA) dissolves in water, it dissociates into a hydrogen ion or proton (H+) and an anion (A–) according to this general reaction:

When an acid (HA) and a base (BOH) are mixed together in water, they neutralize each other to form a salt (AB) and water (H2O) according to this general reaction:

The amount of strong base required to neutralize an acid depends on the amount of acid, not its strength. This is the basis for the TTA determination, where, in one method, a 10-gram sample is diluted in 50 milliliters of water, then neutralized with 4-gram-per-liter (1 N) sodium hydroxide (NaOH) to pH 6.6. The resulting TTA value is expressed as milliliters of NaOH. Other methods use different sample sizes, NaOH concentrations, or conversion factors.

Preferment pH starts at 5 to 6, decreases with time, and eventually levels off. pH is important because it affects many of the processes taking place in dough. Lower pH decreases carbon dioxide solubility and increases the effectiveness of preservatives like calcium propionate. The optimum is 4.2 for gluten swelling and 5 to 6 for yeast activity.

Preferment TTA starts below 1 and increases with time. TTA is a better indicator of fermentation activity than is pH, because it continues to increase after pH levels off.

Monitoring fermentation progress is important when optimizing the effects of preferments on yeast activity, flavor contribution, and dough development. The graph (right) shows a 50-percent flour preferment, where yeast activity peaks at about 1 hour, pH levels off after about 2.5 hours, and TTA continues to increase beyond 3 hours. If the optimum fermentation activity was at 2 hours, the optimum TTA would be 2. This value can be used to standardize the results with other preferments even if time and temperatures vary.

Find the right yeast for your preferment here at Lallemand Baking. And connect with us on LinkedIn!