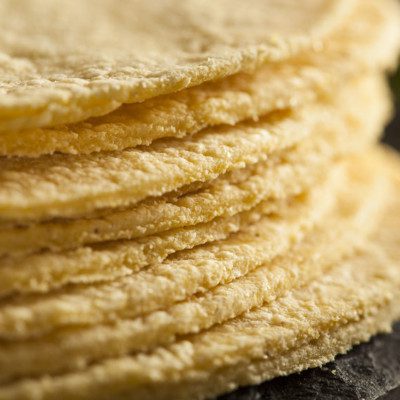 Also known as alkaline- or lime-cooking of maize

Nixtamalization is the process of masa preparation that involves cooking whole corn in water containing lime (alkali), steeping and washing, and then followed by grinding and drying the resulting nixtamal to masa flour.

Masa is used in the production of various maize-derived goods such as corn tortillas, corn chips, tortilla chips, tacos, etc. Nixtamalization is considered one of the three value-added processes of maize processing:

The nixtamalization method as a means to produce food was developed by ancient Mesoamericans. Pre-Columbian indigenous civilizations such as the Aztecs and Mayans found in this process the key for their development.1,2

In the traditional process, maize is lime-cooked in clay pots over a fire, followed by overnight steeping. The resulting nixtamal is washed by hand and milled into a “masa” (Spanish word for dough) with a stone grinder named metate.1,2

The ancient manual nixtamalization process has now been adapted to high-speed manufacturing methods aimed towards the production of large volumes that serve growing markets around the world.

The following block diagram shows the steps of the nixtamalization process: 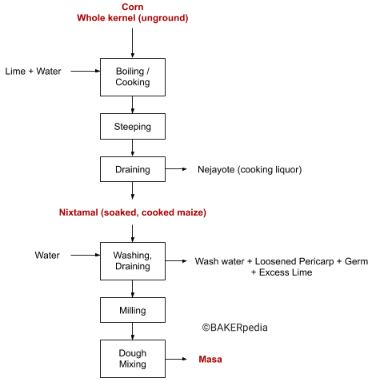 The basic ingredients used in the nixtamalization process are maize kernels, lime, and water. Shelf life extension and improved nutritional value of masa dough or dry masa can be achieved via incorporating ingredients such as gums, emulsifiers, acidulants, preservatives and vitamin premixes.

This process can also increase the concentration of resistant starch in nixtamalized corn flour, a potentially beneficial attribute for ‘low glycemic’ formulations.

Maize intended for nixtamalization should meet the following criteria:2,3

Kernels with a soft texture cook faster but break easily during storage, transport and processing. It is expected that the pericarp be easily removed during nixtamalization. Hard kernels can take longer to cook and do not absorb enough water after normal processing times.

Typical kernels water absorption is about 30%  during cooking and an additional 15% during steeping. This phenomenon is closely related to the degree of starch gelatinization. A high-quality maize should tolerate overcooking and abuse during handling and industrial manufacturing.

This weak alkali can also enhance the bioavailability of calcium and improves niacin bioavailability but may negatively affect other nutrients due to leaching (solubilization) of phenolics, organic acids, antioxidants (carotenoids) and B-vitamins (water-soluble) into the steep or wastewater commonly known as nejayote.2,3

Loss of corn solids during nextamilization is considered an economic as well as wastewater disposal problems.