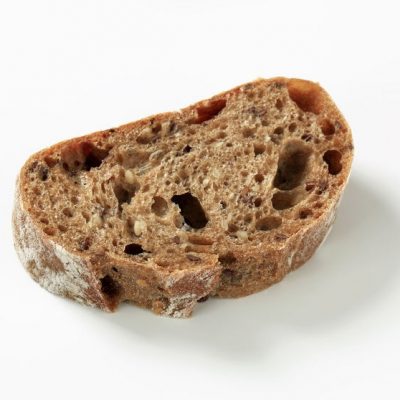 What is High Fiber Bread?

High fiber bread is a whole wheat or whole grain bread that is enriched with extra fiber and contains at least four grams of fiber in a single serving. Extra fiber sources include wheat or oat bran, soy or seeds.

There is no recognized definition of what constitutes a high fiber diet and the amount of fiber consumed in the typical human diet varies significantly by region, with 20 daily grams at the low end and 80 grams at the high end. Most Americans consume about 15 grams daily.

High fiber breads are made either with whole wheat or white wheat flour enriched with fiber in the form of wheat bran, oat bran, soy or seeds.

Dietary fiber comes primarily from plant material and is composed of complex, non-starch carbohydrates and lignin.3 Compounds classified as fiber are primarily obtained from plant-based sources. Cereals have been grown by humans for thousands of years and wheat – the seeds of which can be ground into flour, semolina and other products – forms one of the basic ingredients for breads, bakery products and pastas.4

It is believed that Eben H. Hipsley was the first to use the term “dietary fiber” in reference to the non-digestible components that make up the plant cell wall, including cellulose, hemicellulose and lignin. By 1976, the definition of dietary fiber had expanded to include indigestible polysaccharides such as gums, modified celluloses, mucilages, oligosaccharides and pectins. As knowledge of the benefits of dietary fiber expanded, researchers began identifying foods – such as high fiber breads – that would contribute to a diet higher in the substance. 5

High fiber bread is rich in dietary fiber. Consumption of high fiber bread may reduce the risk of certain health conditions and aid in weight loss. It is recommended that consumers aim for 3 – 5 grams of fiber per serving in processed foods like breads.9

A high-fiber diet lowers blood cholesterol levels and stimulates bacterial fermentation in the colon. These underlying actions may contribute to the health benefits of dietary fiber for health promotion and disease prevention, for example, chronic disease such as heart disease and some types of cancer, diabetes, and obesity 2. Most Americans don’t get the recommended amount of dietary fiber. Dietary fiber is considered a “nutrient of public health concern” because low intakes are associated with potential health risks 2.

Bread made with whole meal is slightly brown and is denser than white bread. By using bread softeners and gluten, the texture of whole meal bread may be improved. 5 Dhinda et al.6 studied the effect of replacement of wheat flour with a combination of soy protein isolate, oat bran and chickpea flour (SPOBCP) at the levels of 20%, 40% and 60% and addition of additive combinations on the rheological and nutritional characteristics of bread. And the research found out that combination of 0.002% alpha-amylase + 5% gluten protein + 0.5% SSL + 0.5% HPMC increased the strength of the dough with 40% fiber combination. Singh et al.7 observed improvement in functional and baking properties of wheat-chickpea flour blends with addition of gluten (1.5%, 3.0%, 4.5% and 6.0%) and SSL (0.5%). Jacobs et al.8 found out that pre-hydrate barley fiber-rich fractions then added at the dough stage improved bread quality, and addition of xylanase improved the loaf volume, appearance, crumb structure and firmness of barley fiber enriched bread.

One way to improve the quality of high fiber bread is to add additives. Gluten protein has been used to obtain normal loaf volume as it imparts viscoelastic properties to the dough. The ionic surfactant sodium stearoyl-2-lactylate (SSL) can increase the dough stability due to the interaction of surfactant with protein, lipids and starch. The hydrocolloid (Hydroxypropylmethylcellulose, HPMC) is observed to increase the interface activity between water and the non-aqueous phases of the bread dough favoring the formation of emulsions and strong uniform film. Carbohydrase can be used to degrade the fortified polysaccharides and decrease its negative effect on the bread quality. 7,8

Another way to increase high fiber bread quality improvement is to optimize the baking process. Lastly, reducing the particle size of the fiber powder allows for an increase of water-holding capacity by increasing the degree of surface area.

FDA regulates in food labeling that the terms “high” may be used on the label when the food contains 20% or more of the RDI (Reference Daily Intake) or the DRV (Daily Reference Value) per reference amount customarily consumed.1 The Daily Value for fiber is 25 g per day based on 2,000 calories diet.2