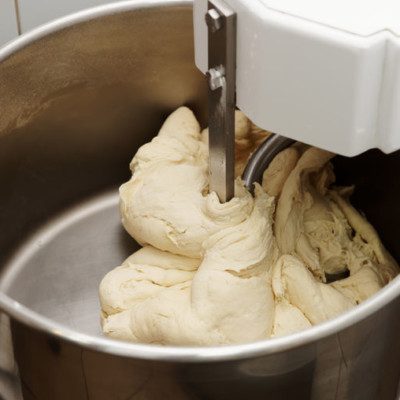 What is Gluten Hydration?

Gluten hydration is an essential step in baking because it helps activate wheat gluten proteins.

In water, gliadin and glutenin proteins interact to establish bonds and form small protein strands. This is the basis for how a cohesive viscoelastic gluten matrix is developed. It’s essential for retaining gases during fermentation.1,2 A properly hydrated gluten network will:

Gluten hydration provides a way for water molecules to bind to several polar groups in proteins:2

Amino acids such as glutamine, threonine and serine are responsible for the water binding capacity of gluten. This is because around 30% of gluten is hydrophobic.2

When hydrated, gliadin is viscous and can be stretched to a thin strand that flows easily with gravity like glue. On the other hand, hydrated glutenin is very elastic and has a large resistance to deformation and stretching forces. When these two proteins are combined, they form a three-dimensional, continuous network called gluten. So, gluten has both viscous and elastic properties.3

It is impossible to create dough with optimum handling properties without hydrating gluten proteins first. If the dough is not sufficiently hydrated, wheat flour proteins can’t participate in forming a network during baking.

Gluten hydration is influenced by:

To see if the dough is properly hydrated and mixed, perform the gluten film or window pane test. A small portion of dough is stretched between the hands into a thin, smooth, translucent film to test its extensibility and elasticity:

Predicting the amount of water for gluten hydration

For example, say there is 100 g flour with a protein content of 13% (gluten accounts for 80%). Gluten needs to absorb about 2 times its own weight to become fully functional (2 g water / 1 g dry gluten).3

The question is, how much of the total water is used to hydrate gluten?