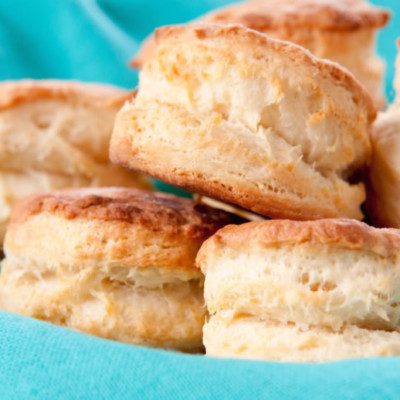 American biscuits are small quick bread rounds that can be either cakey and dense, or flaky and light. Traditionally, biscuits have been chemically leavened with baking soda or baking powder. Biscuit doughs are described as:

Many types of biscuits are known such as buttermilk biscuits, cream biscuits, etc. They  are best served warm and topped with a variety of options such as honey, butter, or jam, and eaten as a breakfast or brunch treat.

Biscuits date back to Ancient roman times. The term ‘biscuit’ originated from the French word which means “twice-cooked.” The process yields a low-moisture baked good that’s very stable during extended storage, making it ideal as a ration of the Roman Empire army.

The American biscuit was introduced  by European colonists during the latter part of the 18th century, and was referred to as a “soda” or “baking powder” biscuit. Biscuits were quickly adopted by home-bakers in the Southern region of the U.S. due to the availability of buttermilk, lard and soft wheat flour. First refrigerated (buttermilk) biscuits were made and patented by Ballard and Ballard in 1931 which later became Pillsbury biscuits.

How are biscuits made?

Here is a typical biscuit formula:1,2

* Protein content 9.0–10.0%, ash content of about 0.40–0.45%
** Hydrogenated, plastic at room temperature, no emulsifiers added. Butter can also be used
*** Water and nonfat dry milk solids may also be used as replacement to perform similar functions as liquid milk
**** Baking soda may also be used. Then the dough mixture should be supplemented with acids such as vinegar, citrus fruit juice or buttermilk.

The processing time, from scaling through loading the oven, should not exceed 20 minutes. A smooth operation will guarantee the effectiveness of chemical leavening and will yield a product with excellent characteristics.

Pre-shaped refrigerated or frozen biscuit doughs are available commercially with a relatively longer shelf-life of 2-3 months.

Refrigerated doughs are manufactured as described above with a significant variation: the dough is allowed to develop before packing into fiber containers. As the dough is proofed, carbon dioxide is generated which expands the dough and drives the oxygen out of the container.3

Biscuit doughs containing baking soda need to be quickly processed to prevent sodium bicarbonate from reacting too soon with acids even at room temperature. The proportion of CO2 release should be 30% during mixing and bench time, and 70% during baking.4

Liquid forms of ingredients contain water to make them fluid and pumpable. When switching from dry to liquid forms, a mass balance is necessary to know the exact amount of solids added and water to be cut in the formulation.

The selection of flour is important for the characteristics of the finished baked product. As flour strength increases, product spread decreases and height increases. Sidewalls are strengthened when using flours from hard wheats, whereas flours from soft wheat tend to give the greatest break and recession around the center of the sidewalls of the biscuit.

The flour should only be hydrated and gluten partially developed in order to obtain the desired texture in the finished product.

Have You Thermal Profiled Your Frozen Dough?